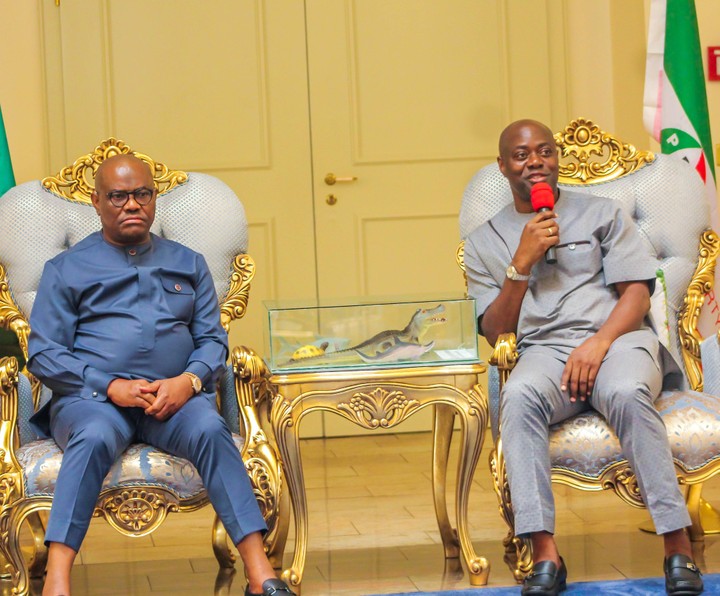 Ahead of preparation for the 2023 general elections, Gov Nyesom Wike of Rivers Stare, on Tuesday, visited his Oyo State counterpart, Seyi Makinde, on the need for the governors under the umbrella of the Peoples Democratic Party (PDP) to be more united.

It was reported that some PDP chieftains in Rivers state, including former Gov. Celestine Omehia; two former Deputy Speakers of the House of Representatives; Chibudom Nwuche and Austin Opara.

Also former Presidential Adviser on Amnesty Office and Managing Director of NDDC, Chief Timi Alaibe; a former Minister of Transport, Chief Abiye Sekibo and the chairman of the Rivers State PDP, Mr Desmond Akawor, were among the entourage.

Wike said he was on a visit to Gov Makinde to work out ways to strengthen the party for 2023 general elections.

He said PDP could not afford to lose this opportunity, claiming that a lot of Nigerians were waiting for the PDP in 2023.

“PDP governors must be united. It does not matter who will be the party’s presidential candidate.

“Once the party and governors are united, I can tell you that victory is on our way.

“So, the unity of the governors is key to making sure the party gets it right.

“It was the way we were united that made us produce the national chairman and the best national convention, which got surprised Nigerians.

“We should also do the same by working hard to produce the presidential candidate, who will win the election for the PDP in 2023.

“This is because if we lose it this time around, Nigerians will not be happy with us.

“We must all rally round anybody the party produces to be the presidential candidate and make sure that we win the election,” Wike said.

The Rivers governor also used the opportunity of the visit to commiserate with Makinde and the people of the state over the recent demise of Olubadan of Ibadanland, Oba Saliu Adetunji.

He prayed that God would guide and give the Oyo state governor, the wisdom and courage to install a new Olubadan.

“Sometimes, people don’t know certain qualities of some people until you give them certain assignment.

“It is on record that, in the history of PDP, the last convention that you as the Secretary of the Planning Committee, came out to be the best of the best,” he said.

In his response, Makinde maintained that the unity of the party should be paramount to all members.

“The unity, especially that of the governors of our party is paramount and most of the successes we have recorded so far are really because we are together.

“This visit is timely and appreciated, because 2022 is the year when the political parties will take decisions on who would fly the flags of their parties, from the Presidency to even the lowest positions.

“This is a year we have to take serious decisions, because whatever we do and whatever the outcome is, Nigerians will have to live with that for the next four years,” Makinde stated.