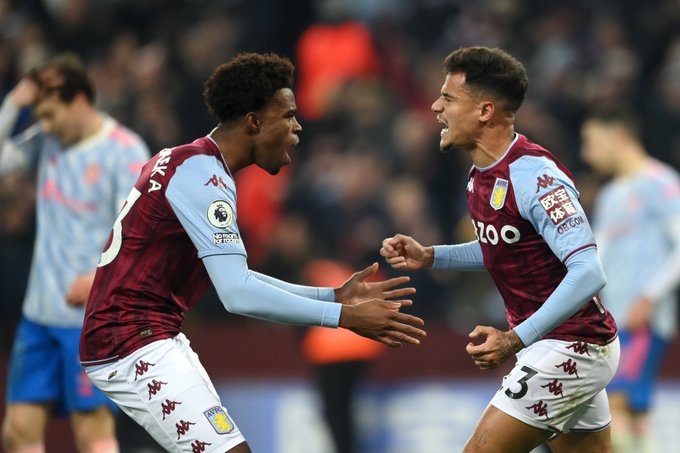 Philippe Coutinho made a dream debut for Aston Villa as the Brazil star’s late equaliser capped a thrilling fightback from two goals down against Manchester United in Saturday’s 2-2 draw.

Four years after he last played in the Premier League with Liverpool, Coutinho made an instant impact on his return to England following his loan move from Barcelona this week.

Coutinho came off the bench midway through the second half with Villa trailing 2-0 after Bruno Fernandes’s double for United.

The 29-year-old provided the assist for Jacob Ramsey to give Villa hope with 13 minutes left.

Coutinho then converted Ramsey’s cross five minutes later to ensure Steven Gerrard’s side made amends for their FA Cup third round exit at United on Monday.

Coutinho suffered a disappointing time at Barcelona, but Gerrard was confident he could bring the forward back to his best after playing with him at Liverpool.

The early returns look promising, although United will be kicking themselves for letting the game get away.

United have now gone two league matches without victory after losing to Wolves in their previous top-flight game.

With United languishing in seventh place, there will be fresh questions about interim boss Ralf Rangnick.

Rangnick had already endured reports that United’s players were unimpressed with his coaching methods and his backroom staff.

This collapse will hardly ease the gloom around United, with their late meltdown taking the gloss of Fernandes’s return to form.

Fernandes owed his first goal to a howler from Villa goalkeeper Emiliano Martinez, who let his free-kick spill into the net.

The Portugal playmaker’s second goal was the kind of eye-catching finish that made his name when he arrived at United from Sporting Lisbon in January 2020.

But United couldn’t hold the lead in another blow to their bid to qualify for next season’s Champions League via a top four finish.