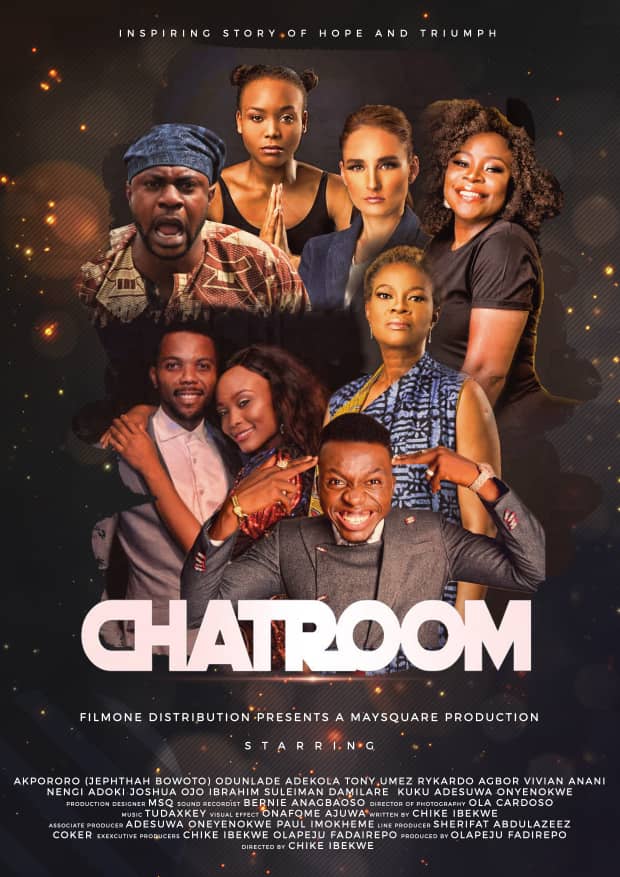 Journalists, actors and comedians have joined forces to stand against Gender Based Violence (GBV) to produce a new movie titled “CHATROOM” to be released on Good Friday, April 15.

The Producer of the movie, Olapeju Ibekwe, told our correspondent on Tuesday in Lagos that “CHATROOM is a beautiful mix of comedic thrills with core themes around love, betrayal, stigma, sexual abuse, violence, power and more.

“The film, premiered to the press and the diplomatic community at the Deputy British High Commissioners residence in March 2020, was inspired by true life events.

“A suspense-filled drama, the movie tells an authentic, fun, socially relevant and inspiring story, a must-watch for everyone.

“The film, set in Lagos, Nigeria, tells the gritty, yet inspiring story of Ebiere (Nengi Adoki), an almost down and out young lady in her mid-20‘s struggling with the scares Gender-Based Violence inflicted on her.”

Ibekwe said that Ebiere sought an escape route from the hunting ghost of her past experience by clinching to an opportunity of being enlisted in a popular dance Reality TV show.

“The fun filled TV reality show takes an unexpected turn when she is triggered to face her past trauma, causing a nationwide turmoil.

“Laced with comedy, romance and power tussles, it is a story of overcoming and finding one’s voice.”

“Written and directed by award winning Film Director, Chike Ibekwe, CHATROOM is a contemporary 98 minutes drama that will take its audience on a roller coaster of emotions and have its audience at the edges of their seats,” Ibekwe said.

The producer added that Ghanaian Actor, Kobby Acheampong, Cameroonian Actor and Dancer, Lea Dibebe, Actress and Author, Damilare Kuku, among many others, also made the list.

She maintained that CHATROOM would be the debut of Ace Broadcaster and Publisher, Adesuwa Onyenokwe, into the movie industry as she was also the Associate Producer of the movie, apart from having an appearance in it.

Ibekwe said that the movie, shot on locations and in studios in Lagos and Onitsha, could be seen from its global release date of April 15 on www.afrocinema.tv.

“It will also have its exclusive official premiere on April 17 at the Wheatbaker Hotel, Ikoyi, Lagos.”

According to the UN definition, GBV is any act that results in, or is likely to result in physical, sexual or psychological harm or suffering to women, whether occurring in public or private life.

The UN High Commission for Refugees (UNHCR) also refers to GBV as harmful acts directed at an individual based on their gender. It is rooted in gender inequality, the abuse of power and harmful norms.

GBV is a serious violation of human rights and a life-threatening health issue.

It is estimated that one in three women will experience sexual or physical violence in their lifetime.

During displacement and times of crisis, the threat of GBV significantly increases for women and girls.

Gender-Based Violence is preventable and UN is committed to promoting gender equality and human rights and protecting refugees and other persons from GBV.