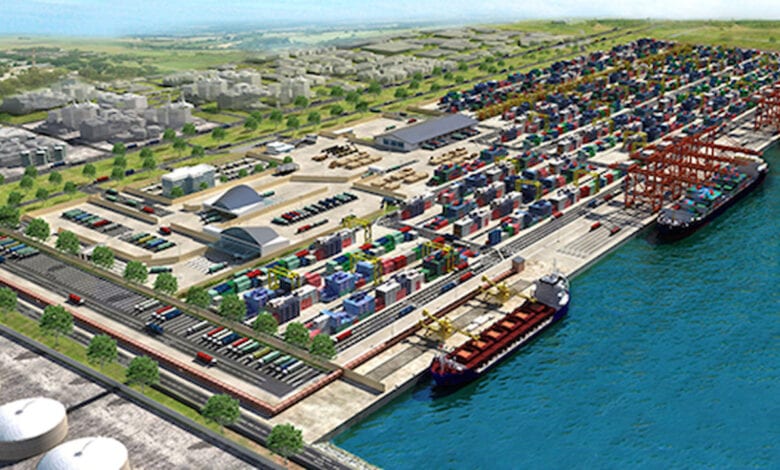 Some maritime stakeholders on Thursday said the economic benefits derivable from the Lekki Deep Seaport were enormous and would boost the country’s Gross Domestic Product (GDP).

They disclosed this in an interview with our correspondent on Thursday in Abuja.

They commended the efforts of the President Muhammadu Buhari-led administration, championed by the Minister of Transportation, Mr Rotimi Amaechi on progress of the project.

Our correspondent reports that Buhari, during his recent engagements in Lagos, inspected the rate of work done at the first Deep Sea Port in Nigeria located in the Lagos Free Zone.

Buhari, while inspecting progress of work at the port, directed the Minister of Transportation to consult and bring up a memorandum to the Federal Executive Council (FEC) to link the facility with the railway network.

The President, Nigeria Private Sector Alliance, Mr Adetokunbo Kayode, said the Lekki port, being one of the biggest in Africa, would be of huge benefit to the nation’s economy.

Kayode, a former Attorney General and Minister of Justice, said upon its completion, the project would result in better efficiency in the import and export of goods in the country.

He said: ”Of course it will also help us to reduce the stress that has been created by Apapa port which is a colonial port which we ought to have done away with 50 years ago.

”But right now, we have this opportunity, this first phase which hopefully should be completed before the end of the year would help to alleviate all the challenges of international trade in Nigeria.

”The main aim of government is to diversify the economy which includes expanding your export trade.

”So this new port will help greatly to increase the opportunity for enhancing our export business especially in a volumetric business like agriculture and also in mining.

”Right now, we do very minimal solid mineral export which is just a shame but with this opportunity and other policies coming into place.

“It will help proper development of the mining industry, the beneficiation industry as well as the processing industry for minerals and agricultural products and we will be able to ship things out.”

According to Kayode, the port has the potential to increase Nigeria’s GDP by almost 200 per cent because it will open doors for people to do business and help the nation benefit from the gains of the African Continental Free Trade Area.

”You know Nigerians are not lazy people, it’s just that there is this disconnect between government and the private enterprise.

”So, with this continued efforts of government to enhance this very important cooperation between the private and the public sector, then we can do a lot more,” he added.

Kayode, therefore, urged the Federal Government to progress solutions to the challenges of a good road network and rail connectivity to the port for better services delivery of the project.

The Managing Director, Nigerian Export Processing Zone Authority (NEPZA), Prof. Adesoji Adesugba, said the Lekki port could accomodate the biggest vessel in the world, and as such create jobs for thousands of Nigerians.

“We are going to have thousands and thousands of Nigerians working here. The effect on the GDP will be awesome.

”The location of the port here is going to open doors for those who want to have their factories and production centres around the Lagos Free Zone.

”The effect of this is that Nigerian goods will be competitive. Companies will be able to employ more Nigerians rather than go outside to employ foreigners,” Adesugba said.

”It means that the economic imperative in terms of profit making will also quadruple because the more business that you do the less costly it is to do that business as well.

”We are moving away from the kind of gridlock that we had in Apapa and Tincan and I’m happy to be part of history of this event.

”I commend the Minister of Transportation, Rotimi Amaechi, for his efforts in ensuring that the contractors deliver the project.”

”So, naturally, bigger vessels will be able to come in and that will enable the Nigerian government to be able to get additional revenue with regard to shipment.

”This is going to be the first port that has the ship to shore crane in Nigeria.

”With this, those big vessels that would rather go to neighbouring countries will now be able to come into the country,” he said.

NHRC, others canvass abolishment of death penalty in Nigeria