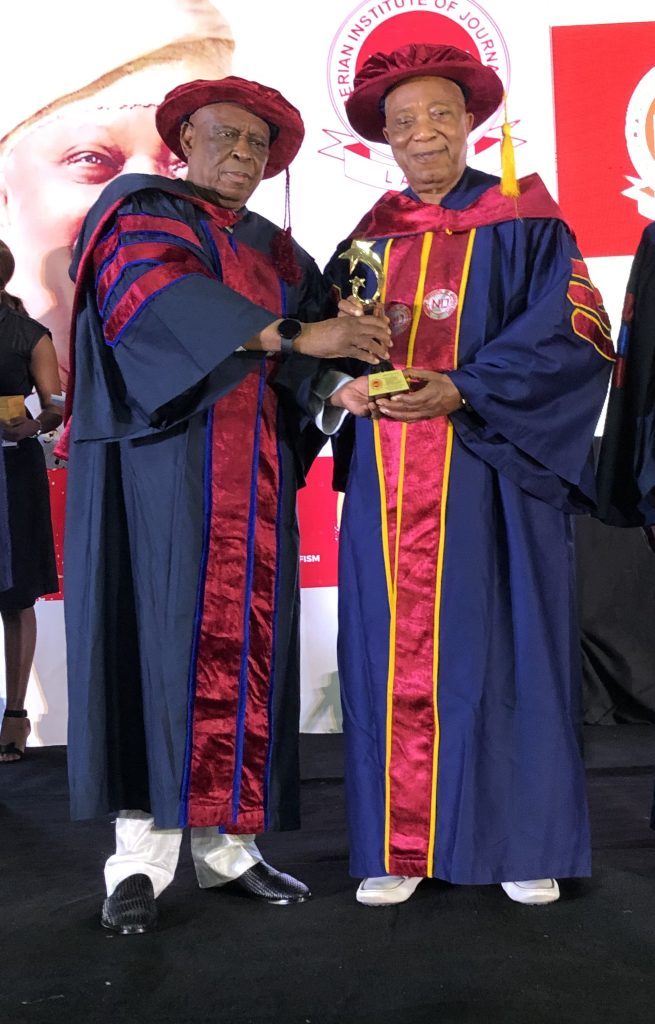 Chief Olusegun Osoba, Chairman, Governing Council of NIJ, while conferring the award, commended Adebutu for his humanitarian services in the country.

He noted that the award was approved by the International Press Institute (IPI) which is made up of editors, media executives and journalists.

“This award is of upmost importance because of the humanitarian services this wonderful gentleman has rendered to this institution and the country as a whole.

“We hope that this will serve as a springboard for other people to take a cue from your cap and also impact the society in more ways than you have done,” he said.

In his speech, Mr Gbenga Adefaye, the Provost of NIJ, described Adebutu as a global icon of philanthropy, an illustrious son of Africa and a proud Nigerian.

He said Adebutu’s collossal investments in the lives of others had affected the socio-economic, political and cultural landscape of the country and, by inference, the media industry.

Adefaye said that NIJ was a unique centre of communication excellence driven by the critical stakeholders in the media sector.

“As a public trust, NIJ requires continuous support from public and private organisations and well-meaning individuals to assist her fulfil the mandate of training critical drivers of democracy and sustenance of good governance.

“The training and retraining of those charged with this onerous responsibility of the watchdog and holding government accountable cannot be taken for granted,” he said.

The provost challenged privileged Nigerians to emulate Adebutu’s commitment to humanity, education and health development, declaring that the award was a celebration of such attributes.

Gov. Babajide Sanwo-Olu of Lagos State commended NIJ for maintaining its code and ethics in the teaching of journalism.

Sanwo-Olu, who was represented by Mr Gbenga Omotosho, Commissioner of Informatin and Strategy, urged well meaning Nigerians to impact other people’s lives.

“The NIJ must be commended for the great job it has been doing in bringing up professional journalists who are knowledgeable, fearless and aby-election e by the rules of the profession.

“Also, the Golden Jubilee Special Convocation for the conferment of the fellowship award must be applauded as it shows that the recipient’s contribution to the society hasn’t gone unnoticed.

“Mr Adebutu has been carrying out several humanitarian efforts for decades and he is deserving of this award, but I’m also appealing that he should not stop. He should continue to impact and improve the lives of the people,” he said.

Mr Kesington Adebutu, recipient of the award, in his remarks, said that journalism must be given the right support to enable it carry out its role in the society.

According to Keshington, journalism plays a vital role in the lives of human beings.

“The importance of journalism cannot be overemphasized; that is why it needs all the support it can get so as to thrive well.

“The press is vital and very important because it is a major source of information which determines what happens to the society. It is essential that they get all the support they need.

“I’m very grateful for this award given to me and I promise that I wouldn’t relent in my efforts in serving the people,” he said.