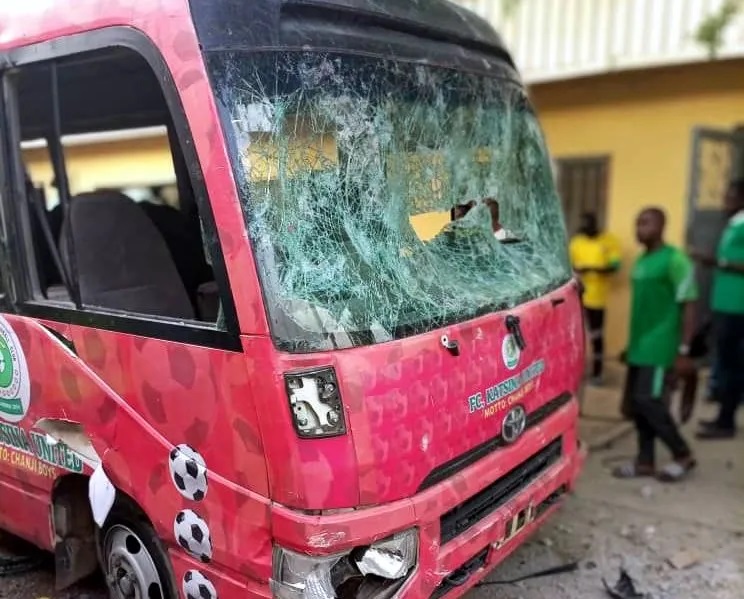 Gov. Abdullahi Ganduje of Kano State has condemned the action of some football fans, suspected to be supporters of Kano Pillars football Club.

In a statement issued by the Chief Press Secretary to the Governor, Abba Anwar, on Wednesday in Kano, the governor slammed the unruly fans for damaging a bus belonging to the visiting Katsina United Football Club.

It was reported that the governor promised to replace the bus which was destroyed when the two teams met last Saturday at the Sani Abacha Stadium, Kano, in an NPFL fixture.

“As a government, we totally condemned this action and by the Grace of Allah, the genesis of it will be unraveled as we are raising a very powerful committee that will look into it.

“This action will not, in any way, harm the cordial relations existing between Kano and Katsina States, Kano and Katsina people are one and the same and will remain together forever,” the governor was quoted as saying.

It was reported that fans invaded the pitch in the 79th minute of play, damaging the visiting team’s bus and also parts of the bus belonging to the Pillars.

Our correspondent reports that the game was the first in the stadium in over two years and spectators, especially Pillars fans, trooped there in their numbers to watch their darling team play.

Sensing that the game, which was still goalless in the 79th minute would soon be over, the unruly fans invaded the pitch to cause mayhem.

Ten Hag to take over at Manchester United