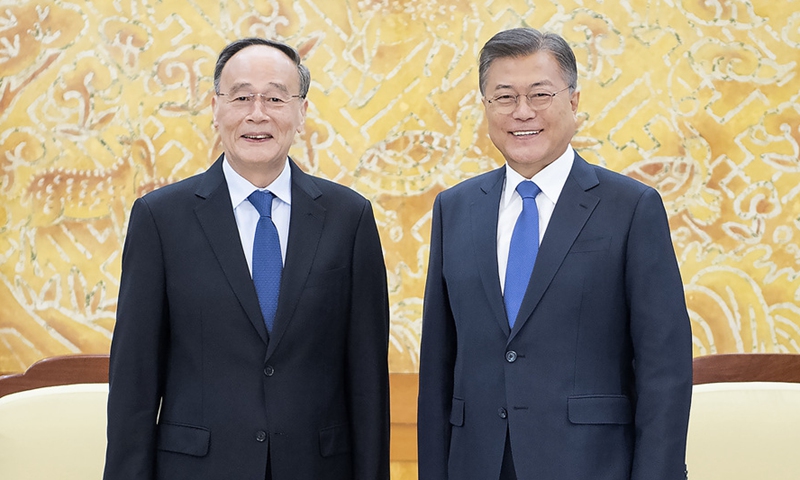 Wang, known as one of the closest aides to Chinese President Xi Jinping, paid a courtesy call on Moon after arriving in Seoul, leading his country’s delegation to attend the inauguration ceremony of incoming President Yoon Suk-yeol on May 10.

“Even comparing with past inauguration ceremonies of South Korean presidents, China has sent a top-level delegation this time,” Moon said.

“It shows Xi and the Chinese government’s determination on the South Korea-China relationship.”

According to Moon, the two countries should expand human and cultural exchanges, as he rated high on advancements in their cultural content exchanges last year, including the resumption of screening Korean movies in China.

In response, Wang said Xi considered his exchanges, working relationship and friendship with Moon very important, and that China and South Korea were important neighbours and long-time friends.

During their talks, Moon also thanked China for supporting South Korea’s efforts to bring peace to the Korean Peninsula.

Wang said China highly evaluated Moon’s contributions to improve inter-Korean relations and China would also concentrate on the denuclearisation of the Korean Peninsula.

Wang also invited Moon and his wife to China, saying they were welcome to visit the country anytime, for which Moon expressed his gratitude.

Before his meeting with Wang, Moon met with Singaporean President Halimah Yacob, who was also in Seoul for Yoon’s inauguration ceremony.

Moon expressed hope of expanding trade and investment between the two countries, through the Comprehensive and Progressive Agreement for Trans-Pacific Partnership (CPTPP), a mega free trade agreement involving 11 Asia-Pacific nations that South Korea is seeking to join.

He also asked for Singapore’s continuous attention and support on North Korean issues.

Halimah stressed the need for close cooperation between South Korea and Singapore, noting the region’s peace was also an important matter to Singapore as well.