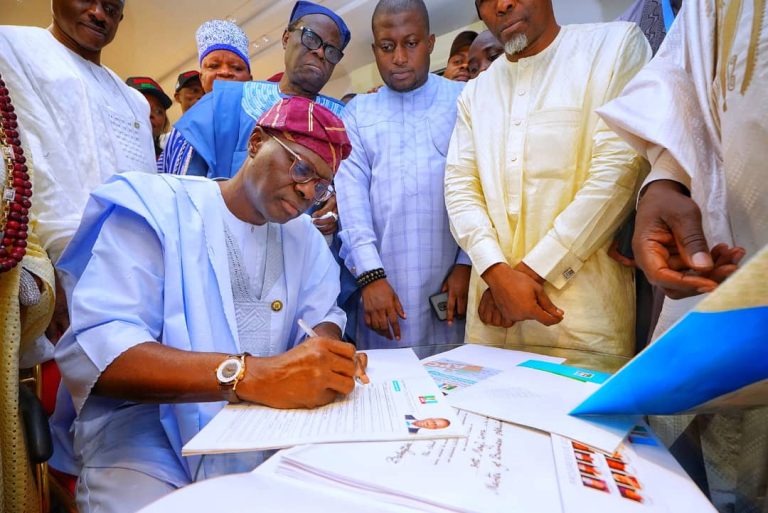 Gov. Babajide Sanwo-Olu of Lagos State has submitted the Expression of Interest and Nomination Forms for his re-election, on the platform of the All Progressives Congress (APC).

He told newsmen after submitting the forms that with the support from the masses, he was confident of victory during the March 11, 2023, governorship elections.

According to him, his administration is committed to the delivery of real dividends of democracy in all aspects of lives of the Lagos residents.

”We have put in place, a robust economic agenda, which we call the THEMES developmental agenda and it has propelled all the various interventions that we have had in Lagos.

”We know where we are as a nation, but Lagos continues to remain safe and secure. We have the highest foreign direct investments and it is because the environment is safe and secure.

”It is because we have provided the platform for the Organised Private Sector to thrive. Mind you, Lagos, during the pandemic period, was the epicenter for COVID-19.

”For about one and a half years, we were slowed down but our slowing down didn’t slow down economic development. It gave us the opportunity to redouble our efforts and ensure that people can feel us meaningfully in all areas.

”We did not give excuses about COVID. In fact, COVID propelled us to have better health facilities as we speak today. We have improved our health infrastructure and the number of health practitioners that we have in all of our health institutions,” he said.

The governor said residents of the state were appreciative of his administration’s first four years and had given assurance and the confidence for the administration to push forward for the second term.

On the 2023 presidential election, he expressed his support for rotation of the presidency to the South, in line with the position of the Southern Governors Forum, that the South should produce President Muhammadu Buhari’s successor.

”I think that it is what is fair, justiciable and just. It is really about Nigeria but there are aspirations everywhere and there are so many eminently qualified people, but in the spirit of equity and fairness that we have in our country, I think it is just morally fair that it goes to the South.

”South-West is showing serious interest in that space. So, we believe that our positions from those meetings are very valid,” Sanwo-Olu said.

Commenting on last Friday’s meeting of APC leaders in the South-West with presidential aspirants from the geopolitical zones, held at Lagos House Marina, he said the objective, which was about protecting the interest of the zone, was achieved.

”We cannot cross all the ‘t’s and dot the ‘i’s just in one sitting, but it was a good start for us and we were sincere with ourselves and we hope that in future engagements, all the expectations that we have in our region will come to pass,” Sanwo-Olu said

2023: US urges media to give voice to all Nigerians