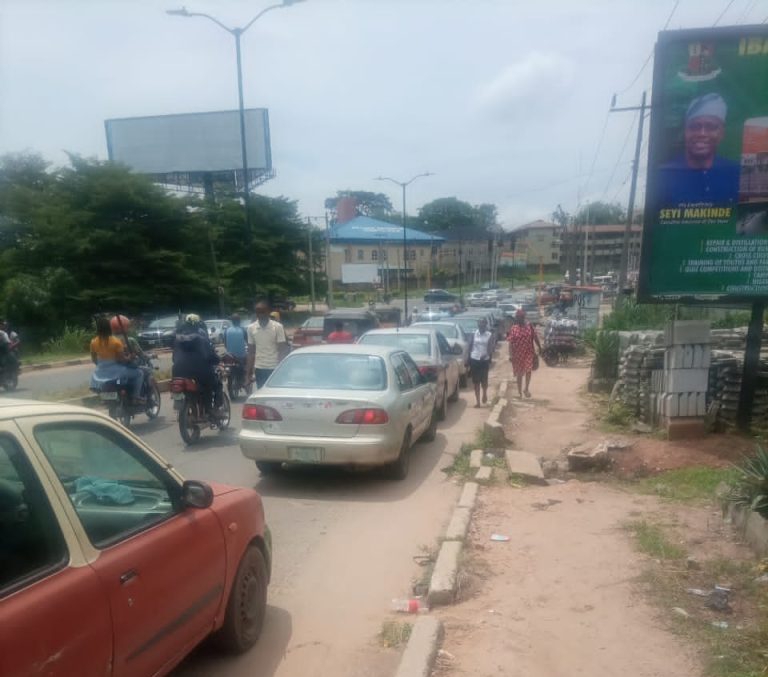 Motorists in Ibadan and other major towns in Oyo State are now groaning in pains as fuel scarcity on Thursday resurfaced in the state.

Our correspondent reports that few filling stations that opened for sale within Ibadan metropolis were characterised with long queues of vehicles, motorcycles, tricycles and jerry cans.

It was gathered that motorists and commuters’ were stunned on Wednesday evening to notice that some filling stations had hurriedly closed the stations and stopped selling the product.

On Thursday as early as 7.00 a.m, it was observed that both the private and commercial vehicles were seen joining long queues in all the filling stations visited.

Our correspondent, who went round some parts of the metropolis, reports that the scarcity had spread to virtually every part of the city, including, Mokola, Sabo, Agodi Gate, Secretariat Road, Total Garden, Sango, Dugbe, Iyaganku, Queen Elizabeth Road and Challenge areas of Ibadan.

Commenting, Mr Olu Gbolarumi, said that no one knows the reason for the fuel scarcity.

Gbolarumi said: “We only noticed that not all filling stations were opened for business, hence, the rushing of motorists to filling stations, especially the commercial vehicles, leading to long queues in the few stations that opened.

“Sincerely, we don’t want this trouble again. This happened some months back; so, why is it happening again,” Gbolarumi said.

Also, Mr Aina Abimbola, a commercial motorist, said: “We want to work, but there is no fuel to work with.

“I earn daily income to make a living; so, I have to queue for fuel and get it at all costs to survive.

“Times are hard and we cannot cope with fuel scarcity as it will add to people’s sufferings.”

In his reactions, a petrol attendant, who pleaded anonymity, said: “I don’t know. We are just seeing people coming in and queuing for fuel.

“Our own is to sell. We don’t know why people are rushing in for fuel.

“We are still selling at the normal price and we cannot send people away.”