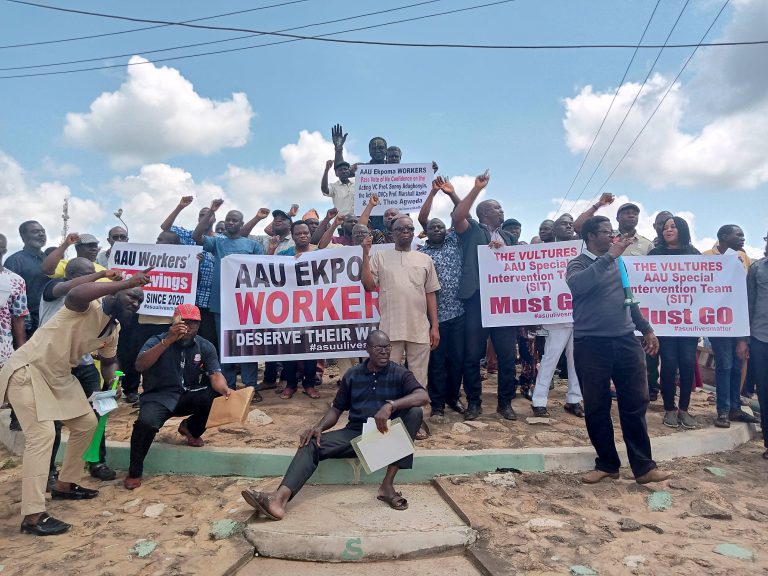 The lingering industrial crisis at the Ambrose Alli University (AAU), Ekpoma, Edo, on Wednesday got worsen as the national leaders of Academic Staff Union of Universities (ASUU) staged a solidarity rally round the community.

The rally, led by the National President of the union, Prof. Emmanuel Osodeke, caused gridlock at the centre of the town.

Our correspondent reports that chairmen of local branches and past presidents of the union joined in the protest that witnessed a large turnout of lecturers.

Addressing newsmen beside the statue of the late former governor of old Bendel State, Prof. Ambrose Alli, Osodoke frowned at ASUU ban in the university by Gov. Godwin Obaseki.

The governor, he said, lack the power to suspend a properly registered union such as ASUU that had the right to operate anywhere in the country.

The ASUU president also noted that the setting up of Special Intervention Team (SIT), headed by an holder of Nigerian Certificate in Education (NCE), to run the university as against a governing council negated the law.

“As we speak to you, this university does not have any substantive officer.

The union leader decried the situation where all principal officers of the institution were appointed in acting capacities.

Osodoke, however, asserted that the only way to guarantee industrial harmony was for the state government to retract its decision and allow the union to run without interference.

He also called for the payment of salary arrears to the lecturers as well as the remittance of deductions for dues and contributions for cooperative.

Dr Cyril Onogbosele, the AAU ASUU branch Chairman, said the solidarity rally was to show there was no distinction between union in state and federal universities.

“We want revitalisation of public universities. We want better conditions of service, infrastructural development, universities autonomy. That is what the strike is all about.

“In AAU, one of them is inadequate funding. For a long time we have had these problems.

“Workers have been denied our salaries for 19 months now.

“Many of us are dying as a result of that. We cannot meet our financial obligations to our families because of unpaid salaries,” he said.

The branch ASUU chairman claimed that no fewer than 19 lecturers had died because they could not afford medicare.

On his part, the immediate past president of the union, Prof. Biodun Opeyemi, said the union needed to rise up against the action of the state governor, proscribing union activities in the state owned institution, in order to deter other state governors from following Obaseki’s step.

In her reaction, Dr Joan Osa-Oviawe, thecstate Commissioner for Education, said the state government was focused on prioritising the academic welfare of our students and ensuring that there is value for money.

Tertiary education, she said, was being revamped in the state to ensure that graduates were ready for the world of work and also skilled enough to be relevant in the 4th industrial revolution in a technology-driven, hyper modern world.

Our correspondent reports the Edo government and the ASUU at the state owned institution had been at a loggerhead for years over accusations and counter-accusations bordering on welfare of academic staff.