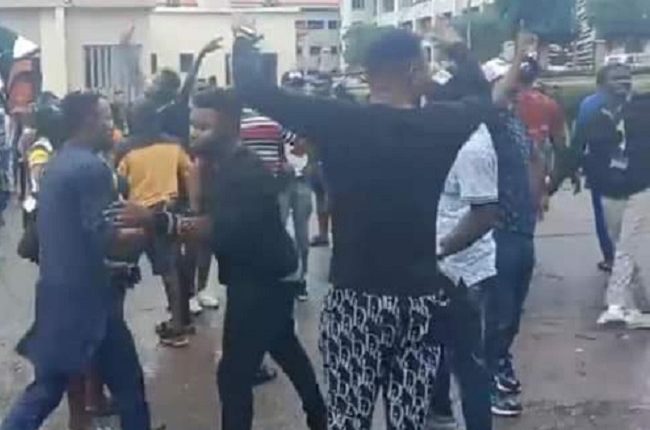 Students of Rufus Giwa Polytechnic, Owo, Ondo State, on Friday protested the death of one of their colleagues, Mr Folarera Ademola, who was allegedly killed by a personnel of the state security outfit codenamed Amotekun.

Ademola was an ND1 student of Science Laboratory Technology Department in the institution.

The incident broke the existing peace of the learning environment, as the irate students converged on the school main entrance to express their displeasure.

The students chanted mournful songs while police vans were sighted.

Speaking with newsmen, the Students’ Union President of the polytechnic, Mr Olorunda Oluwafemi, said that Ademola was allegedly shot on June 27 by an officer of the Amotekun in front of his parents’ house.

Oluwafemi added that the deceased suffered gunshot wounds and died on Thursday at the Federal Medical Centre Owo.

He said that the students were expected to march from the school gate through the palace of Olowo of Owo before taking the protest to Amotekun office in Owo to further express their anger.

Oluwafemi, therefore, asked the state government to hand over the said officer to the police for prosecution within 24 hours, take charge of the deceased’s burial, and compensate the family.

Reacting, Chief Adetunji Adeleye, the state Commander of Amotekun, explained what led to the unfortunate death of the student.

He said: “In its avowed determination to ensure that Ondo State is rid of criminal elements, the state Amotekun Corps is investigating the case of a syndicate that specialises in attacking Okada riders with dangerous weapons and dispossess them of their motorcycles in the process.

“Luck however ran out of one of the syndicates who was given a hot chase into a building in Owo by men of the Amotekun Corps where other members of the gang met 15 men in the building, 7 out of the men stacked naked inside the room filled with smoke. Four Okadas were also found inside the bedroom.

“After introducing themselves to the men, the men struggled to disarm the operative whose alarm attracted the other two outside.

“In an attempt to apprehend the suspect, they swung on men of the Corps, trying to disarm them and in the course of the struggle, one of their riffles triggered off and hit one of the suspect and an Amotekun officer.

“At that instance none of them told Amotekun officers that they were students.

“Our men eventually overpowered the suspects, arrested and took them to the Corps Office in Owo where they were detained.”

According to him, the incident occurred on June 27 and June 28.

”He was later released on health ground, promising to return to the corps custody so as to continue investigation.

“The suspect left our facility on same day, 11 days after the incident to get first aid treatment with the promise to return in continuation of the investigation.

“Surprisingly, the news of the dead of the injured suspect filtered yesterday after 11 days the incident occurred.

“We sincerely register our condolences to the family and friends of the deceased while we continue with our indepth and thorough investigation to the real cause of his death.

“The Ondo State Amotekun Corps, however wishes to assure the public that it will work with stakeholders including NANS, the polytechnic community and family of the victim to ensure that justice is timely served,” he said.