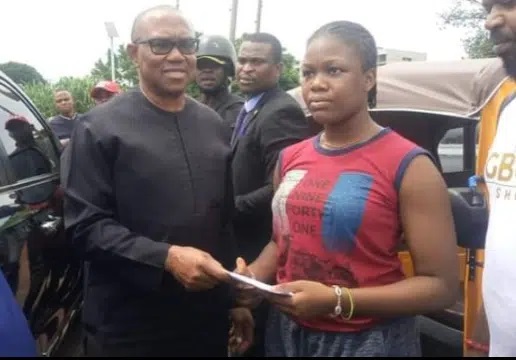 He told our correspondent in a telephone interview in Enugu on Wednesday that his daughter received divine instruction to give the money to any good humble man who would commit it to her future.

“My daughter has been saving the money and when I enquired from her why she was saving, she told me that she received divine instruction to give the money to any good and humble man.

“A good and humble man who will be committed to affecting her future positively,” he said.

Onyebuchi, who is currently a medical student of the Enugu State University of Technology (ESUT), said his daughter had been a dedicated christian, who belonged to Scripture Union during her time in Secondary School.

“Covenant is very humble; very prayerful and a committed christian.

“So, when she heard that Peter Obi was in the neighborhood, for an interview at the Urban Radio around our house, she told me she was going to give Obi the money.

“And before I moved to join her, she was already on her way to meet Obi,” he said.

The teenager caused reactions after handing an undisclosed amount of money to the LP candidate on Tuesday in Enugu as her contribution to his campaign.