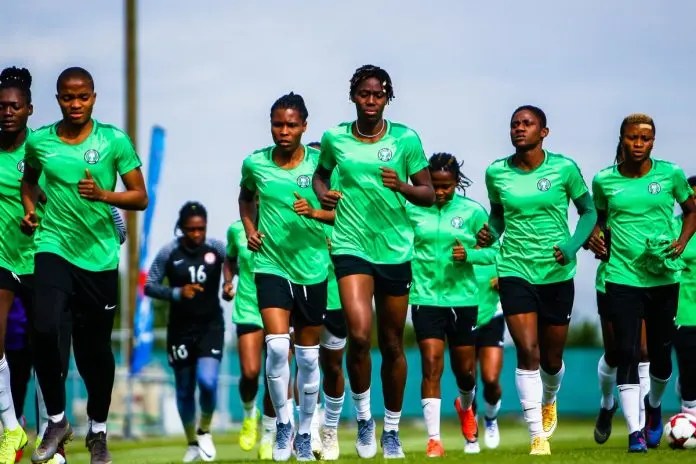 Nigeria and Zambia will battle for the bronze medals of the 12th Women Africa Cup of Nations (WAFCON) on Friday at the Complexe Mohamed V in Casablanca.

Head Coach of Zambia’s Copper Queens, Bruce Mwape, said on Thursday that his girls have put behind them the controversial defeat to South Africa.

They had lost 0-1 after an added-time penalty kick that is still a talking point at the Morocco 2022 finals.

“We gave our all and created goalscoring chances but we failed to take them and that was a mistake that we paid dearly for in the end.

“But we have put that behind us and now, we want to win the bronze medals for our people.”

On his part, Randy Waldrum is optimistic that Nigeria’s Super Falcons will give their all in spite of a rash of injuries and suspensions in the camp of the nine-time champions.

“We have two players suspended as a result of red cards in the last game, and we also have some players down with injury.

“So, there will be changes but we will go for the best legs that would give us victory on Friday.”

Team captain Onome Ebi has been knocked out by a hamstring injury (biceps femoris muscle tear — Grade 2) and could require between six weeks to two months to recover.

She suffered the injury in the grueling semi-final battle against Morocco on Monday which the Falcons lost 4-5 on penalty kicks shootout after a 1-1 draw in Rabat.

Forward Rasheedat Ajibade has been a cornerstone of Nigeria’s campaign with some mesmerising moves, measured pull-outs and three goals to the kitty.

She picked up the Woman-of-the-Match award in the quarter-final defeat of Cameroon.

However, she is out of Friday’s encounter alongside tenacious midfielder Halimatu Ayinde.

It was reported that both were sent off in the match against the host nation.

“We have a mountain to surmount, surely. But we are ready and will approach the game as if it is the competition’s final match,” defender Ashleigh Plumptre said at Thursday’s pre-match conference.

Mwape will bank on team captain Grace Chanda to inspire the Copper Queens against the Super Falcons.

Chanda has been the rallying point of the southern African nation since the beginning of the tournament, in the absence of the talismanic Barbara Banda.

While goalkeeper Hazel Nali (injured against South Africa) is doubtful for Friday’s encounter, Nigeria would again rely on the agility and awareness of goalkeeper Chiamaka Nnadozie.

Her string of saves kept the Falcons in the game against Morocco until the penalty shootout, leaving her highly deserving of her Woman-of-the-Match award in that tie.

With Ebi out, Waldrum could start with the U.S-based Payne sisters (Toni and Nicole) on either side of the rear wings, with Osinachi Ohale and Plumptre at centre-back.

Peace Efih, who scored one of the goals in the 4-0 defeat of Burundi in the group stage, could start in the absence of Ayinde.

The effervescent Gift Monday is a probable to start in place of the suspended Ajibade at the fore.

It was reported that the Copper Queens drew 0-0 with Cameroon in their opening match, before 1-0 and 4-1 wins over Tunisia and Togo respectively shot them to the quarter-finals.

That was where they edged Senegal 4-2 after a penalty kicks shootout.

The Falcons lost 1-2 to South Africa in their opening game before beating Botswana and Burundi 2-0 and 4-0 respectively, and Cameroon 1-0 in the last eight.

Djokovic should be at US Open, McEnroe says