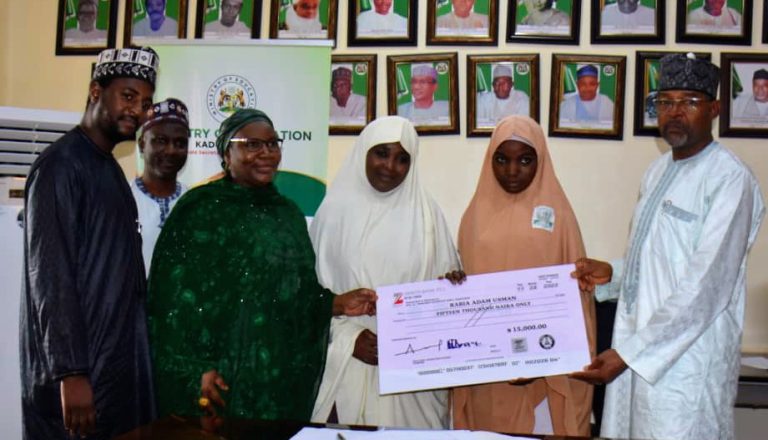 At the disbursement ceremony in Kaduna, the Project Coordinator, Mrs Maryam Dangaji, said that the CCT intervention was an incentive to promote girl child school enrollment, retention, and completion.

Dangaji said that the incentive was also to encourage parents and caregivers to ensure that the girls transit from one class to another.

“The initiative is to support girls that were prevented from attending schools due to hawking and other commercial activities at home.

“This is because available research shows that most girls stop their education at primary six while others manage to reach Junior Secondary School (JSS).

“The essence of the CCT was to ensure that the girls transit from primary six to JSS I and from JSS I to Senior Secondary School (SSS) classes.

“The target classes for the cash transfer are primary six, JSS I and SSS I,” she said.

She explained that schools in 15 out of the 23 Local Government Areas would benefit and were selected based on poverty ranking and low transition.

She added that no fewer than 30,000 girls were expected to benefit from CCT in four cohorts within the life span of the project.

Dangaji, however, said that the subsequent payment would be done on the condition that the girls achieve 70 to 80 per cent attendance in classes and do very well in their studies.

“I am urging the parents and caregivers to use the money for which it was meant for and ensure their girls are enrolled in school, remain in school, learn and transit to the next class,” she said.

The Permanent Secretary, Ministry of Education, Dr Haliru Soba, said that measure was part of efforts to promote girl child education in the quest for human capital development.

Soba said that the CCT would ensure that children of the poor attend school regularly, learn, and transit to the next class up to senior secondary school and graduate.

He also called on the parents to use the fund judiciously and ensure that their girl child did not drop out of school but complete secondary school education.

One of the secondary school principals at the event, Mrs Austin Dukas, commended the World Bank for the initiative, describing it as “crucial” to the promotion of girl child education in the state.

Our correspondent reports that the objective of the AGILE project is to help improve secondary education opportunities among girls in targeted communities.