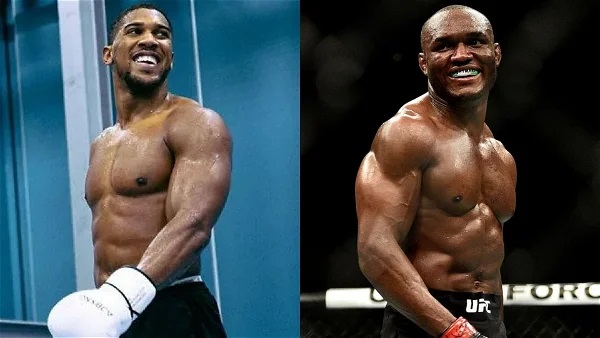 Sports enthusiasts say the defeat of Nigeria’s Anthony Joshua and Kamaru Usman on Sunday is a learning curve in the illustrious careers of both fighters.

It was reported that both Joshua and Usman lost title fights to their Ukrainian and British opponents on Sunday.

Joshua was defeated by Ukraine’s Oleksandr Usyk on a surprise split points decision after 12 hard rounds to retain his WBA, WBO, IBF and IBO world heavyweight boxing belts in Jeddah.

While Briton, Leon Edwards pulled off a fifth-round head-kick knockout out of nowhere to dethrone Usman and win the Ultimate Fighting Championship (UFC) welterweight title at UFC 278 in Salt Lake City, U. S.

A cross section of sport enthusiasts who spoke to NAN on Monday, said the loss of the Nigerians would only make them stronger and better fighters.

Silas Agara, the President, Karate Federation of Nigeria (KFN) said that in combat sport just as in other sports, there are always bound to be hard times which test your resilience as an athlete.

“Just like the popular saying goes, ‘What doesn’t kill you, makes you stronger.’

“Indeed the true test of one’s resilience is usually at these kind of ‘down to earth’ moments and they are very necessary for one’s growth.

“It is usually not easy to digest everything and come back to fight again, especially for Joshua losing to the same opponent for the second consecutive time.

“But I strongly believe that both fighters will bounce back from this defeat even stronger because of their love and commitment to the sport, which is never in doubt.

“They are great champions and will continue to write their names in the history of their sports as well as bring glory to their fatherland,” he said.

Gbenga Elegbeleye, former director general of the defunct National Sports Commission hailed both athletes in spite of their defeats, adding that they were still worthy champions in their own rights.

“Kudos to Joshua and Usman. What an amazing title fight both Nigerians gave to the world.

“Life is a constant challenge and a fight that you have to prove your worth as a champion daily. Even if you fall sometimes, you have to get up and try again.

“That is the true worth of a champion. You must learn to be magnanimous both in victory and in defeat.

“Both Nigerians are champions in their own rights having defended their titles on several occasions.

“Having said that, I must specially congratulate Usyk for representing the great people of Ukraine and showing strength in the face of adversity and difficulty.

“His emotional power and ability to withstand adversity showed the true spirit and strong will of the Ukrainian people in the face of their current challenges,” he said.

He said that they should be assured of more support to rise back to the top in their difficult times.

He said that it was unfortunate that up till now there was no message from the Presidency or the Ministry of Sports showing solidarity with Joshua and Usman.

“These are the athletes who have consistently made Nigeria proud, but now that the chips are down nothing have been heard from these administrators and government functionaries.

“It wouldn’t have been a bad idea to stand with them at this trying time in their careers.

“This shows that they only associate with ‘success’ but never the ‘process’. Once you attain the glory they show up for you,” he said.

It was also reported that Usman reacted to his defeat on his official Twitter handle on Sunday promising to bounce back stronger from the setback.

“We’ll bounce back and come with vengeance,” he tweeted.