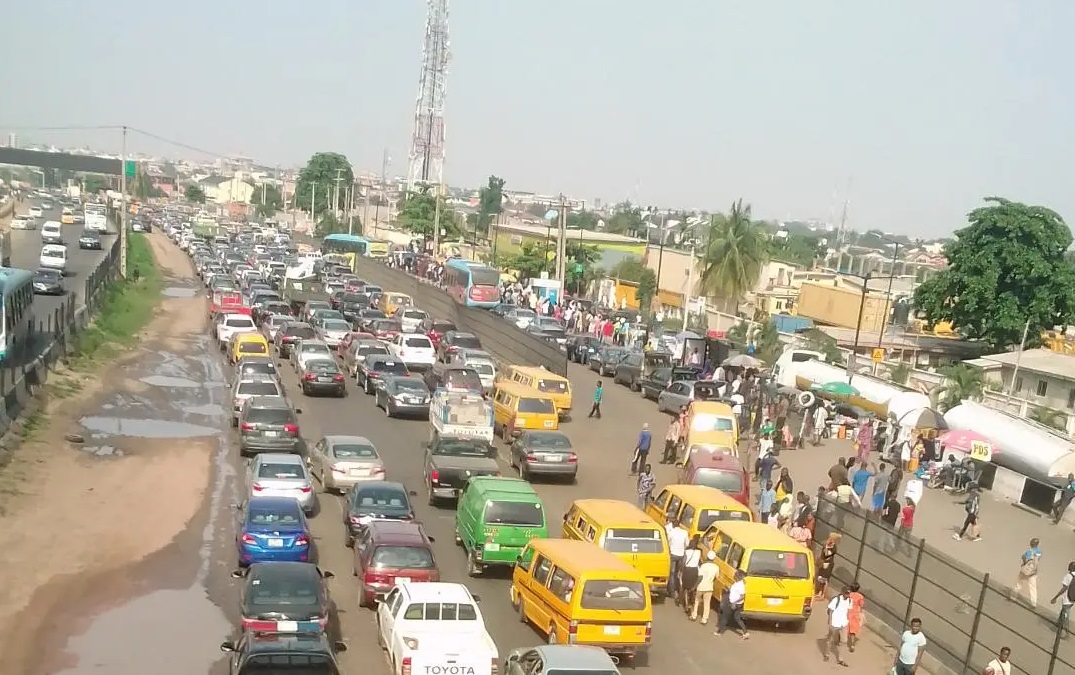 Commuters on the Lagos/Ibadan Expressway are still having nightmares travelling on the ever-busy road due to gridlock caused by bad portions around Kara market and the ongoing reconstruction within the area.

Our correspondent on-the-spot assessment of the situation on Sunday observed that the bad portion is causing serious outward from Lagos and inward into Lagos traffic bottleneck especially around the Lagos/OPIC section of the road.

The FRSC and Police have mounted road blocks to forestall further breakdown of law by commuters forcing their way to drive against the traffic which might cause further havoc.

The traffic which started on Wednesday had continued to leave many stranded at various bus stops with fewer vehicles available to transport intending passengers from the adjourning communities of Mowe, Asese, Arepo and Warewa as well as those travelling from other parts of the country to Lagos where many are working or transacting other businesses.

Commuting from places like Mowe, Ibafo, Magboro and Arepo to Lagos which should averagely take between 20 minutes and 25 minutes have now extended to between six and 10 hours.

Also, the available buses and private car owners are latching on the bad situation to increase fares, while those who are much in a hurry are riding on Okadas to Berger near Lagos.

The bad portion around Kara Market could have been avoided if the contractor, Julius Berger Plc., handling the Sagamu/Lagos portion of the road, had put in palliative measures by patching the bad spots before reducing the road to two lanes from its normal four lanes.

A commuter, Ms Tosin Omojola, told our correspondent that the situation on the road was worrisome given that the contractor was insensitive to the plight of road users.

“The gridlock can be avoided if Julius Berger has done the needful. The issue is that they are not bothered by the hours we waste on the road.

“The road should have been made passable before they divided it into two. The road is supposed to be four lanes, but they were reduced to two to accommodate the ongoing reconstruction.

“We expect that the bad portions should have been fixed, before dividing the road or better still, ensure that the alternative but untarred roads by the expressway are motorable, then they can go on with the main expressway which they are reconstructing.

“I have to spend four hours from Berger to Magboro on Friday night, it was such a difficult time,” she said.

Another commuter, Mrs Olusola Ajayi, said she had to abandon going to market having sighted the traffic.

“I wanted to go to the market on Saturday and when I got to the bus stop, there were many intending passengers waiting for unavailable buses.

“I waited for about an hour before resolving to go back home because I don’t even know what I will face when returning home.

“The economic loss occasion by the reconstruction ongoing on Lagos/Ibadan Expressway is really affecting our businesses and we want the relevant agencies responsible to help mitigate these losses,” she said.

A resident of Magboro, Mr Oluseyi Ojomo, also said he had to find an alternative place to sleep over on Friday because of the gridlock.

“I already knew about the situation on the road, so I prepared for it.

“The reconstruction has made many of us to abandon our homes, made us squatters with friends in Lagos.

“For about two months now, I always leave home on Mondays only to return on Fridays.

“On Friday while returning home, there was an unusual traffic gridlock and the whole Berger area was in a total standstill. After some hours of waiting, I had to return to Lagos to sleep over,” he said.

For Tejumola Oyeleke, working in Lagos and travelling through Lagos/Ibadan Expressway was taking a toll on her health and family.

“With all the early journey, I won’t get to work in Lagos on time mostly spending about four hours before I can get to my office on Broad Street, on Lagos Island.

“This unusual situation is having serious effect on my health because I have been experiencing serious migraine for some time now. Also, my children are missing the motherly care they are expected to enjoy.

“I want to appeal to Julius Berger to please patch the abandoned pot holes on the road and make them motorable. They can even use the tar that they removed from the express roadto patch the bad portions,” she said.

It would be recalled that the Federal Government through the Federal Ministry of Works and Housing (FMWH) said that it was not oblivious of the current Traffic Gridlock being experienced by road users around the Berger-OPIC Axis along the Lagos-Ibadan Expressway as a result of the ongoing reconstruction works on the road in a statement it released on Saturday and signed by Mrs F.F.Oloyede, the Acting Federal Controller of Works, Lagos.

It said, “The Government feels the pains of the people, especially residents of Lagos and Ogun States who are at the receiving end of the inconveniences due to the gridlock and sincerely apologise for the inconveniences caused while at the same time promising to make necessary improvements in the traffic management system on the road in other to alleviate the sufferings of the road users.

“To this end, the Federal Ministry of Works has concluded plans with the contractor to suspend the works for today Saturday 27th August, 2022 in order to plan and make provisions for required improvements in traffic management on the road.

“The Government however, wish to remind the public that the same road that is being reconstructed is also being used to accommodate traffic through dedicated diversions and therefore wish to appeal for the cooperation of all road users with the Contractor and Traffic Management Officers to allow for free-flow of traffic at all times, even while the reconstruction works are ongoing.

“To this end, we appeal to deterrent road users to desist from driving against traffic and obey all dedicated road diversions along the road in order to prevent unnecessary delays on the road.

“There is also provision for tow trucks along the road should in-case of any breakdown, road users should be patient by not driving against traffic and obeying stationed road traffic officers in order to allow for free flow of traffic.

“In conclusion, it is a known fact, that there is no pain without gain, it is thus our utmost believe that the general public would be the ultimate beneficiaries of the world class road infrastructure that the Government plans to deliver through the ongoing reconstruction works on the road. We therefore appeal for the cooperation of the general public towards this end.