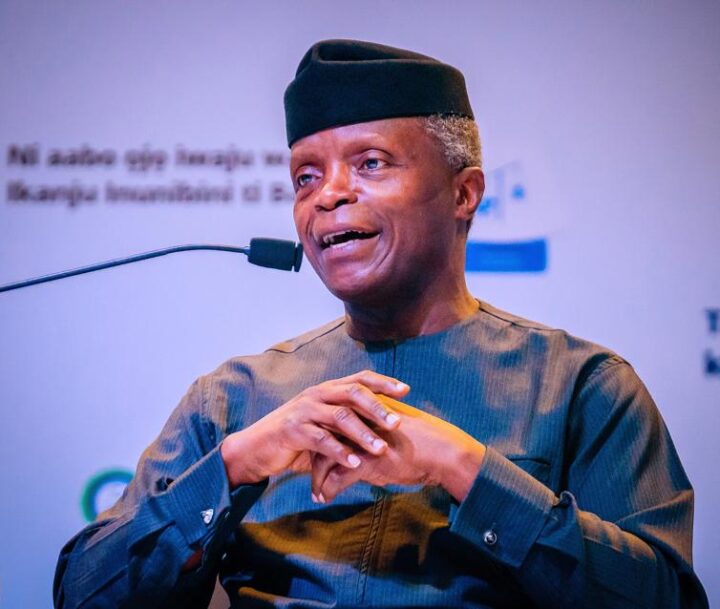 Osinbajo made this known in a speech at the 62nd Independence Anniversary Inter-Denominational Church Service held at the National Christian Centre, Abuja, on Sunday.

The vice president said that the problems confronting the nation would be things of the past as God’s promises for Nigeria would come to fruition.

“Brethren, we stand at the gate of a new nation, and we see its light shining bright; a nation of God’s promises, a nation of opportunities, equity and justice; a secure and prosperous nation, a nation of laws and righteousness.

“Even if what we see today seems bleak and dark, we are confident that God, who owns the heaven and the earth, will fulfill his promises concerning this nation,’’ he said.

Quoting the Bible (Joshua 21 verse 45), the vice president said that all good plans God had in stock for Nigeria would manifest.

He prayed that all Nigerians would see the fulfillment of God’s promises in their lives.

“Not a word failed of any good thing which the Lord has spoken to the House of Israel; all came to pass.

“I pronounce concerning this nation that not a word will fail regarding any good thing which the Lord has spoken of Nigeria. All will come to pass in Jesus name.

“Finally, to every citizen of this nation and every family that is represented here, we declare that in the name of Jesus, your best days are yet to come; every promise that God has made to you will come to pass in Jesus mighty name,’’ he prayed.

Earlier in a sermon, Archbishop Daniel Okoh, President of Christian Association of Nigeria, urged Nigerians not to give up in spite of numerous challenges facing the nation.

He said that it was worthy of celebration that Nigeria had witnessed 23 years of continual democracy.

“From 1999 till today, we have not experienced any military insurgency and forceful imposition of dictatorial rulers unto our nation.

“This, we shall celebrate as well. The Holy Bible teaches us that because of the Lord’s great love, we are not consumed.

“His compassion never fails. They are new every morning; great is His faithfulness,” he said.

According to the cleric, God’s love continues to preserve and sustain Nigeria.

“May all glory and praises be to His name for ever and ever,” he prayed.

Okoh, however, said that although Nigeria had had 23 years of uninterrupted democracy, it was still struggling with many issues of collective concern.

The CAN president implored Nigerians to trust in God to surmount the challenges.

In his vote of thanks, the Secretary to the Government of the Federation, Mr Boss Mustapha, thanked President Muhammadu Buhari, the vice president and others for identifying with the service over the years.

The service featured praise and worship, special renditions, prayers for the president, vice president and other government officials, and intercessory prayers for Nigeria’s peace, security, unity and progress.

It attracted clerics, judicial officers, legislators Federal Executive Council members, service chiefs and members of the diplomatic corps, among others.

The highpoint of the event was cutting of the anniversary cake.

Nigeria at 62: Resilience essential for Nigeria of our dream – Sanwo-Olu