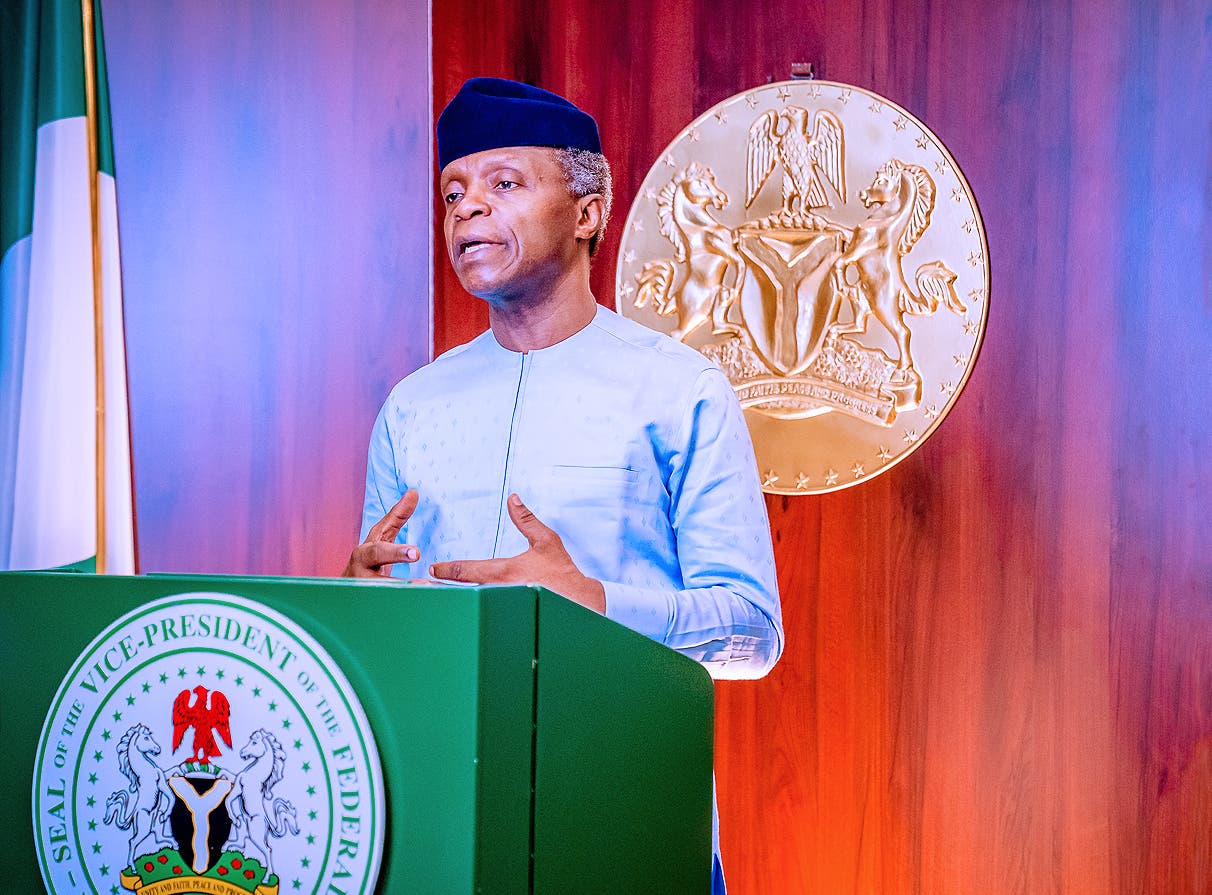 Vice President Yemi Osinbajo, on Tuesday tasked the Armed Forces of Nigeria to leverage digital technology in the fight against terrorism and other forms of insecurity in the country.

Osinbajo gave the charge at the combined 32nd convocation ceremony of officer cadets of 69 Regular Course and postgraduate students of the Nigerian Defence Academy (NDA), Kaduna.

“More broadly, it is clear that we cannot secure or defend a country of this size with human assets alone, we must leverage technology,” Osinbajo said.

He added that the need to come up with technology-driven solutions to addressing Nigeria’s security needs, was more imperative now when national resources were stretched thin.

“We must come up with the policing of our borders or intelligence, surveillance and reconnaissance tools aimed at identifying criminal elements within our coastal waters or locating terrorists hiding within the general population.

“We must become savvier in the deployment of intelligence, surveillance and reconnaissance tools to complement our human resources,” the vice president said.

Osinbajo explained that when applied creatively, technology could be a force multiplier, amplifying Nigeria’s potential and its capacity to effectively secure its territory.

He observed that digitisation had created new threats in the cyberspace, which required protection and security from enemies and malefactors.

“This can inflict damage on Nigeria’s cyber-infrastructure and compromise critical economic sectors such as telecommunications and financial services,” he said.

The vice president further said that the proliferation of digital channels and rapid growth of mobile banking, raised new concerns about data privacy and security.

He added that it also raised concerns about vulnerabilities to malware infections designed to steal money, which if unaddressed could subvert Nigeria’s economy.

Osinbajo said that the military must also focus on the cyberspace, even as Nigeria provide legislations to protect its cyber infrastructure.

“We see cyberspace as part of our strategic domain and have rolled out legislative and policy measures in the form of the Cybercrimes Act of 2015 and the National Data Protection Policy to safeguard our cyberinfrastructure.

“The Cybercrimes Act provides for the designation of computer systems and data networks as constituting Critical National Information Infrastructure.

“There is no doubt that the digital domain is one of the frontiers that the next generation of our armed forces will be increasingly tasked to defend,” he added.

The vice president also said Nigeria must take cognizance of climate change and its implications for national security and military planning.

According to him, aside from the threat of environmental damage as a threat multiplier, desert encroachment and severe weather conditions can create new socioeconomic problems.

He said that as the world gradually stop the use of fossil fuel and gas, there would be massive revenue loss, and Nigeria must begin energy transition strategy for the military.

“Aside from the serious revenue loss from declining earnings from oil and gas, there are the disruptions that may be caused because of our military’s dependence on fossil fuels for transport, logistics, mobility and weapons deployment.

“We must rigorously consider the implications of these shifts on our national defence apparatus.

“The quest for clean energy leads inevitably to considering new options for civilian as well as military uses. This is a challenge to which we must apply,” he said.

Osinbajo also called for the building of local defence capabilities, noting that the procurement of arms was often subjected to the vagaries of geopolitics, geoeconomics and the caprices of the international arms industry.

“In a country the size and population of Nigeria, with threats to our citizenry and sovereignty in different locations, it is absolutely imperative that we build our indigenous national defence capabilities,” he said.

He explained that building indigenous national defence capabilities for Nigeria would entail revitalising the local military industrial complex and investing in the local capacity to manufacture armaments.

The VP said all the research and development entities within the defence sector must have as a priority, the growth of local armaments industry.

According to him, it would open a new frontier of economic growth by advancing Nigeria’s industrial aspirations with the salutary effect of creating jobs for the people.

Osinbajo tasked the graduating cadets on devoting themselves as their forebears did in preserving the unity of Nigeria, noting that the armed forces had long been considered one of the most unified and unifying of institutions.

He also urged the graduating cadets to be good ambassadors of the institution and exude the high moral integrity and learning which they acquired in their academic journey while upholding civil relations with the populace.

Osinbajo implored the NDA to sustain its numerous accreditation status of existing courses while exploring other programmes that were core to its mandate.

He commended the leadership of the NDA for initiating a paradigm shift in the training and education of cadets and postgraduate students.

The Vice President applauded the Commandant and his management team for NDA’s unprecedented infrastructural development and the revamping of ICT facilities on the campus through the procurement and installation of essential equipment.

“I am proud to say that we are leaving behind a confident military institution prepared to sustain the succession plan of producing valiant officers and academic specialists to safeguard our fatherland and drive the knowledge economy,” he said.

Earlier, the NDA Commandant, Maj.-Gen. Ibrahim Yusuf, said the Academy provided the intellectual and professional platform for the search of a grand strategy to overcome the multifarious security threats challenging Nigeria.

He said that the curriculum provided unique experience to cadets and students, aimed at producing intelligent and innovative officers prepared to defend the sovereign integrity of Nigerian without compromising professional values or warrior ethos.

Yusuf said among the 239 Cadets from the undergraduate category, seven graduated with first class degree, 70 with second class upper while 139 with lower second class, 22 with third class, and one with a pass degree.

The Commandant thanked President Muhammadu Buhari, Minister of Defence, Kaduna State Government and the service chiefs for their continuous support and encouragement to the academy.

Others were Chief Eric Umeofia, founder and CEO of Erisco Foods and Prof. Funmi Olonisakin, the first black woman to become a professor and first female professor to deliver an inaugural lecture at Kings College, London.