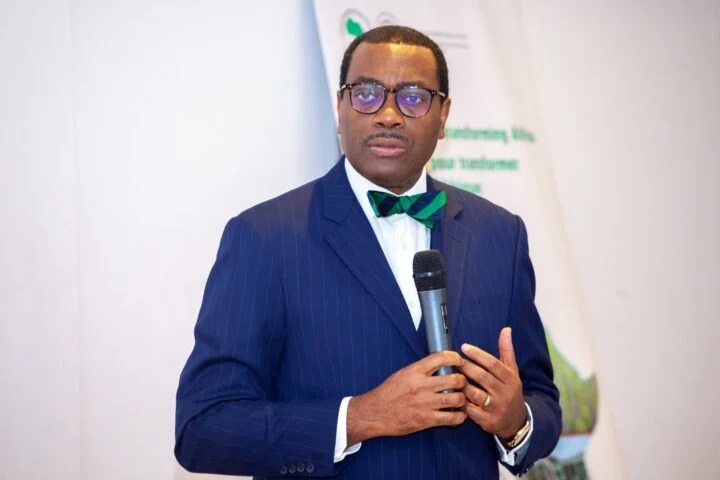 The African Development Bank (AfDB) President, Dr Akinwumi Adesina says that the Africa Investment Forum has mobilised 110 billion dollars in investment interests to Africa since its inception in 2018.

Adesina was speaking at the Official Opening of the Africa Investment Forum Market Days 2022 being held in Abidjan, Côte d’Ivoire.

The News Agency of Nigeria (NAN) reports that the event, which opened on Wednesday will end on Friday.

The AfDB president said the forum was an avenue to mobilise investments for and showcase Africa.

“The Africa Investment Forum is delivering amazing investments for Africa.

“In four years since the Forum commenced in 2018, it has helped to mobilise 110 billion dollars in investment interests to Africa.”

He urged investors to have confidence and invest in Africa.

“Africa is not as risky as you think. Perception is not the same as reality.

“The Africa Investment Forum will make investments to land in Africa. You have all it takes to succeed with your investments.”

Adesina also said the investors were at the forum to seek opportunities for investments, to identify, and to invest in bankable projects in Africa.

According to the AfDB president, Africa beyond aid is an Africa driven by investments.

He spoke on the African Continental Free Trade Area (AFCFTA), which he said was the largest free trade zone in the world connecting economies worth 3.3 trillion dollars.

“So, Africa cannot be ignored. If you are not investing in Africa, think again!

“Africa is the investment frontier in the world – today and in the future. Invest in Africa today, benefit from its great future.

“At the Africa Investment Forum, we do deals, deals, and deals. And they are transformational deals,” he said.

Meanwhile, he said participants at the virtual Africa Investment Forum, held in March, secured 15.6 billion dollars in investment interest for the construction of the Lagos-Abidjan Highway.

“The highway, which carries 75 per cent of trade in the West Africa region, will help unleash greater growth, trade, and investment across the region.”

“They include sports, urban housing, and private equity feeder funds.”

Furthermore, he said Africa would account for more than one quarter of the world’s population by 2050 and would have the largest sources of renewable energy in the world.

“Africa has 65 per cent of the uncultivated arable land left to feed the world,” he said

Presidents who attended were Alassane Ouattara of Côte d’Ivoire, Nana Akufo-Addo of Ghana, Sahle-Work Zewde of Ethiopia, Emmerson Mnangagwa of Zimbabwe, and Patrice Talon of Benin.

Meanwhile, ministers representing Heads of State and Government included Niale Kaba, Minister of Planning and Development of the Côte d’Ivoire and Governor of the AfDB Group.

President of the ECOWAS Commission, Jean-Claude Kassi Brou, ambassadors and heads of diplomatic missions were also in attendance.