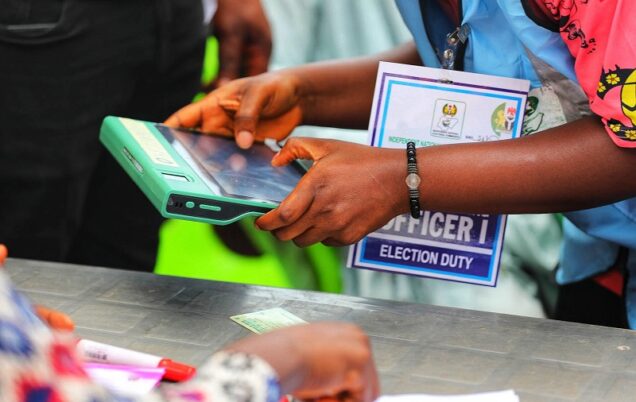 All Bimodal Voter Accreditation System (BVAS) needed for the 2023 general elections would be ready before December.

The assurance was given in Abuja on Thursday by INEC’s National Commissioner and Chairman, Voter Education and Information Committee, Mr Festus Okoye.

He gave the assurance while speaking as a panellist at a seminar on “Optimising technology to safeguard people’s will’’ organised by the Hubert Humphrey Fellowship Alumni Association.

Okoye said BVAS to be used in 27 states were already available.

“We will have the full complement of the BVAS for the 2023 elections; both in the 176,846 polling units and in the 8,809 Registration Areas on ground before December.

“We shall have a BVAS in each polling unit and we are going to have at least two stand-by BVAS in each of the registration areas,” he said.

The commissioner also said that at the end of on-going nationwide display of voters register on Nov. 25, INEC chairman, Prof. Mahmood Yakubu would address the nation on the modality for collection of Permanent Voter Cards (PVCs).

He said while the PVCs of those who registered before Jan. 15 were ready for collection, those that registered between Jan. 15 and July 31 would be ready December.

Speaking on the security of INEC’s ICT platforms, Okoye said beyond the provision of adequate security against hacking, there was also adequate backup for the platforms.

He said that going by INEC’s performance in recent elections in Osun, Ekiti, Anambra and Osun, citizens’ confidence in the Commission had continued to improve.

Okoye said that with the optimising of technology, INEC had been able to build portals for political parties to nominate their candidates online.

It had also built portals for observers and the media to register for election observation as well as portal for voter registration.

He added that the Commission had also enhanced its technology to improve on voter accreditation during elections, which made it to jettison Card Readers for BVAS.

The national commissioner also listed the design of another portal for real time INEC Results Viewing Portal to eliminate rigging of elections.

“What we have done is to try and see in what ways and by what means technology can assist the Commission to do its work better and that’s exactly where we are today,’’ Okoye said.

In his contribution, Executive Director, Yiaga Africa, Mr Samson Itodo, who spoke on “Issues in voter registration and managing voters’ role’’, advised voters to play their roles in ensuring that the 2023 general elections were not manipulated.

Itodo, who was also a discussant, noted that politicians were already attempting to manipulate the 2023 elections and citizens must come up with strategy to negate those attempts.

“From the screening of the commissioners by the Senate there was a report that one of the nominees admitted that he was an aspirant at the 2015 elections in one of the political parties, but today he is INEC commissioner.

“There are states we need to tag as `red flag’ states. We need to monitor the states from where these individuals had been deployed and push back any attempt to compromise elections there,” he said.

Itodo added that another attempt to manipulate the process was the registration of underage potential voters.

He advised citizens to take advantage of the on-going display of voters register and the INEC website to identify the underage registered, dead persons and foreigners and forward their claims and objections to INEC.

Another panelist, Chairman, Editorial Board, ThisDay Newspapers, Mr Olusegun Adeniyi, who discussed “the anatomy of public distrust in election management”, expressed confidence in the capacity of INEC to conduct credible elections in 2023.

Adeniyi urged Nigerians not to take the country’s election for granted but to defend it.

He advised politicians to go into the 2023 election with expectations that they would win, but in the event that they lose, they should not scatter the process.

Former FCT Commissioner of Police, Mr Lawrence Alobi, who was also a member of the panel, said security was fundamental to the electoral process, before, during and after the exercise.

“We already have reports on where political rallies were being attacked in Jos, Kaduna and Borno States,” he noted.

Alobi called for adequate training of security officers in democratic policing, adding that provision of security on election days must not be biased, and must be proactive.

“Untrained security personnel on election duty are a threat to the society and to election,” he stressed.

The retired police officer advised the electorate to vote responsibly; monitor behaviour of security agencies during elections and demand that law and other are followed.