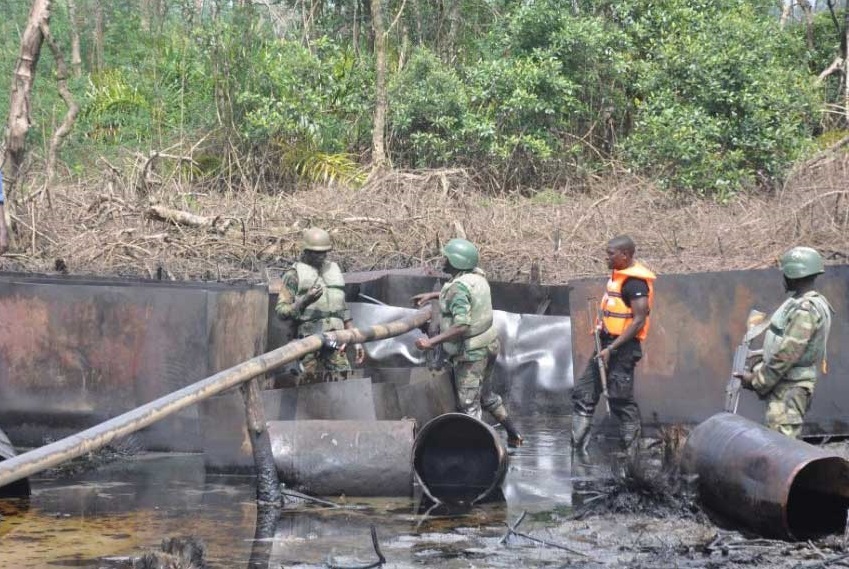 The Defence Headquarters said the troops of Operation Delta Safe and other subsidiary operations discovered and destroyed 44 illegal refining sites in the Niger Delta region in two weeks.

The Director, Defence Media Operations, Maj.-Gen. Musa Danmadami, made this known at a bid-weekly news briefing on the operations of the armed forces on Thursday in Abuja.

He said the troops in the conduct of Operation ‘Octopus Grip’ discovered and destroyed 32 wooden boats, 73 storage tanks, 129 cooking ovens and 40 dugout pits.

“Notably, on Nov. 7, it conducted air interdiction at Abacheke, an identified illegal refining site where significant human activities were confirmed.

“Consequently, the target was engaged and destroyed while air strike led to an inferno that lasted for almost 24 hours,” he said.

In the South East, Danmadami said the military in conjunction with other security agencies had continued to curb the activities of the outlawed Indigenous People of Biafra/Eastern Security Network criminals.

He said the troops eliminated no fewer than 13 IPOB/ESN criminals and recovered arms and other items such as voter registration capturing machine of the Independent National Electoral Commission (INEC).

“Within the week in focus, troops neutralised 13 IPOB/ESN criminals, arrested six including their herbalist.

“All apprehended criminals and recovered items were handed over to the appropriate authority for further action,” he said.

In South West, Danmadami said the troops of operation AWATSE in the conduct of operation ‘Swift Response’ recovered 865 bags of 50kg foreign rice, and 505 (30ltrs) jerrycans of Premium Motor Spirit.

He said that all recovered items were handed over to the Nigerian Custom Services in Ogun and Lagos States for further action.