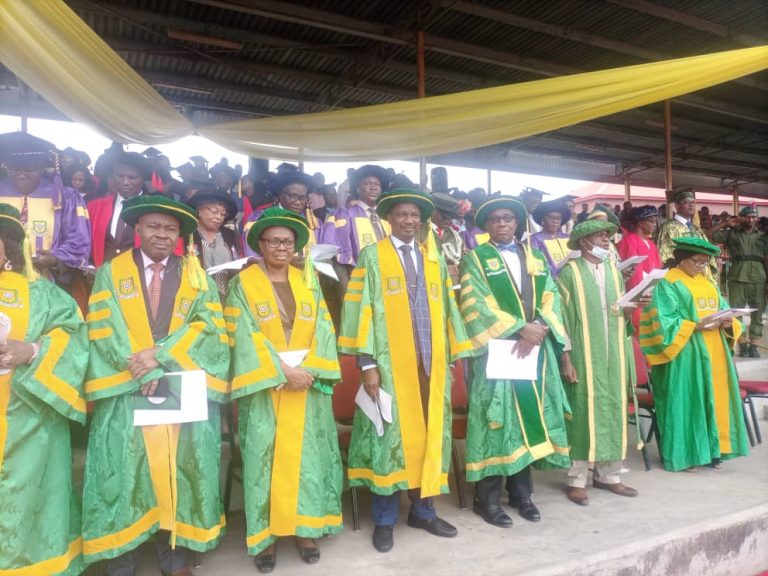 Having successfully completed the academic calendar of prestigious Yaba College of Technology (YABATECH), 7,554 deserving graduands have been awarded National and Higher Diploma degrees during the institution’s 34th convocation.

Obafemi Omokungbe, the Rector of YABATECH, in his address described the ceremony as “the climax of academic calendar, a special, happy occasion when the College celebrates success of graduating students”.

Omokungbe, an Engineer, while congratulating the combined academic session sets, added that the convocation was another achievement of the institution’s mandate as a Polytechnic.

He gave breakdown of the performances of the graduating students as: Higher National Diploma (HND) Full-Time Distinction – 256, Upper Credit – 2,507, Low Credit -3,425 and Pass 779.

Omokungbe expressed hope that succeeding administrations will be faithful to the objective of the 50 billion Naira endowment fund meant for the development of the College and improve on the doors already opened.

He said in spite of achievements recorded in his tenure, there was room for improvement.

“It is our sincere hope that successive administrations will build on modest achievements”.

According to him, the college has put in place a policy to combat sexual harassment which is prevalent in most tertiary institutions.

“This is called Sexual Harassment and other forms of Gender-Based Violence Prohibition (SH-GBV).

“The policy is to guarantee a violence- free, safe and non-discretionary education and work environment in accordance with international regional and national legal frameworks.

“Consequently, the water factory was completed and has been in production since 2019.

“Steps have been put in place for the general improvement of students welfare, safety as well as efficiency and productivity of members of staff of the college,” he added.

Speaking, Mallam Adamu Adamu, the Minister of Education, tasked the Governing Council and Management of YABATECH on the need to expand it’s Internally Generated Revenue (IGR), sources and manage proceeds judiciously and transparently with a high level of accountability.”

Adamu, said: “One of the challenges being faced is in the area of ensuring that technical level education competes favourably with other means of delivering education as a means of ensuring enhanced development for the country.

“It is, therefore, important that you increase your interaction with the industry to achieve more handshake between teaching, learning research on one hand and development on the other,”

The Education Ministry, represented by Vivian Wategre, Director Special Duties, Ministry of Education, reiterated its continuous support in all aspects to strengthen Polytechnics.

“A recent demonstration of this is the recent conclusion of allocation of the revitalisation funds to various polythechnics that were part of Needs Assessment exercise.

“I want to assure you that before the end of year, those polytechnics that have submitted their required information and documentation will start receiving part of what is allocated to them.”

Mr Lateef Fagbemi (SAN), Chairman, Governing Council, YABATECH, in his address implored the Federal Government to conclude the status of the great Institution, adding, “either in degree awarding one or to a University of Technology.

“It will be recalled that the Federal Government had made pronouncements on the conversion of the College to a University several years ago, the National Assembly is still in the process of passing the bill in this regard.

“The College Management has attended and made the requisite presentation at a public hearing held as part of the law-making process, the bill is, at it’s concluding stage,” he said.

The YABATECH Governing Council Chairman declared that it was time for the Federal Government to fulfill its promises of the conversion of the College to University, which would benefit present students and future generations.

Meanwhile, he applauded TETFund for fund assistance which he said saw to the completion of the new School Management and Business Administration Building Phase 1.

“We are indeed grateful to TETFund for your support on these projects.”

It was reported that the Overall Best Graduating Student for the 34th Convocation, Adisa Paul, Civil Engineering, got automatic employment with Lotus Bank with cash gift of N500,000.