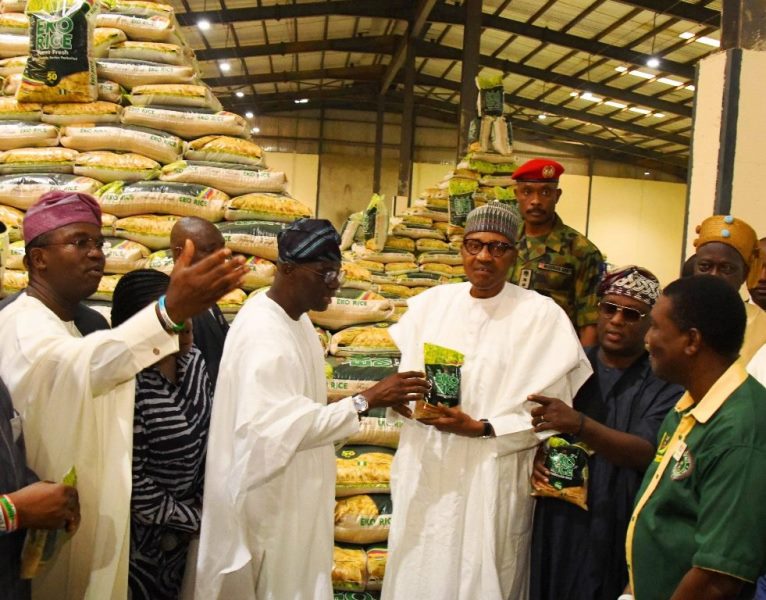 It was reported that the Lagos Rice Mill, Imota is a two x 16 metric tonnes per-hour mill standing on an area of 8.5 hectares of land.

The project has an annual paddy requirement of over 240,000 metric tonnes to produce 2.5 million bags of 5OKg rice per annum.

The president unveiled the rice and observed a brief display of how it is being produced and packaged.

Speaking at the event, Sanwo-Olu said that Lagos was ready to support Buhari’s rice revolution.

According to him, the Lagos Imota Rice Mill is part of President Muhammadu Buhari’s agricultural revolution.

“When he started his government, he says Nigeria must grow what they eat and they should eat what they grow.

“We are happy that Lagos is the testament for that. With 2.8 million bags of 50kg rice per annum, Lagos is ready to support rice and food revolution in Nigeria.

“The units rice mill will create close to 250,000 direct and indirect jobs. We want to thank the local communities of Imota in Ikorodu. We thank you all for waiting patiently.

“Mr president is indeed excited that we have stated another first in Nigeria and in sub-Saharan Africa,” he said.

In his contribution, Dr Femi Oke, Chairman, All Farmers Association of Nigeria (AFAN), Lagos State and South-West Zone, commended the state government for the laudable initiative.

Oke said that farmers would continue to support the mill by providing more paddy.

Hunsa urged the state government to continue to empower farmers with implements in order to increase paddy production to feed the mill.

“This project is very wonderful, it is a thing of joy to us as rice farmers in Lagos. I am happy that such a thing is happening in Lagos,” he said.

It was reported that state government officials, traditional rulers, members of AFAN, Ogbonge Women Farmers Association, Rice Farmers Association of Nigeria and secondary school students are among the dignitaries that graced the occasion.