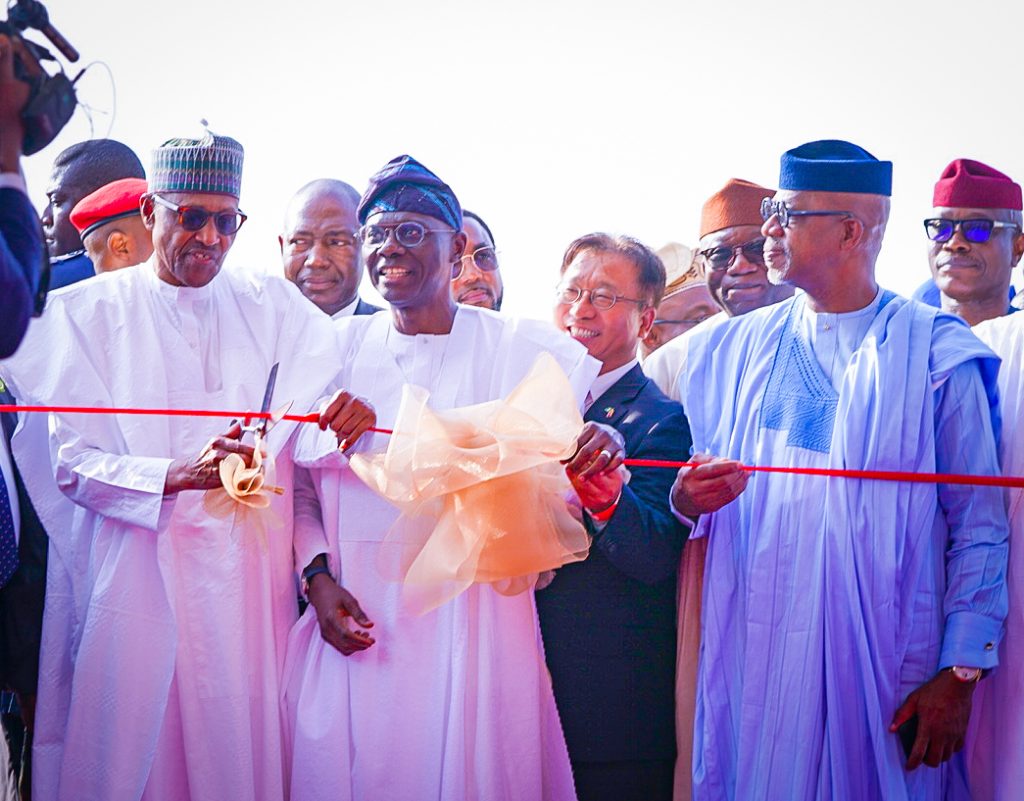 President Buhari, who arrived at the venue in an helicopter alongside Gov. Babajide Sanwo-Olu, cut the ceremonial tape at the port at 4.42 p.m.

The President, thereafter, proceeded on a brief drive-through inspection of the project.

It was reported that the Lekki Deep Sea Port is a multipurpose sea port at the heart of Lagos Free Zone, poised to be the most modern and deepest seaport in West Africa.

It offers critical support to flourishing commercial operations in Lagos state, across Nigeria and the entire West African region.

The port is ideally positioned to service the gateway for Nigeria and the surrounding West African region.

Speaking after President Buhari cut the tape, Sanwo-Olu said the multi-billion naira project was a collaboration between the Federal Government, the Lagos state government and the private sector stakeholders.

Sanwo-Olu described the project as the biggest infrastructure in the whole of West Africa, which would surely generate thousands of jobs in the country.

He said the execution of the project took off under Buhari’s administration and was completed during the President’s tenure, a milestone to be proud of.

The governor, therefore, thanked the President for his commitment to the development of the country and appreciated all those who contributed immensely to bringing the project to reality.

Prior to the arrival of the President, the State Commissioner for Commerce, Industry and Cooperatives, Mrs Lola Akande, had in a speech said that the Deep Sea Port would complement other ports in the country.

Akande said that the port would further deepen Lagos’ position as an investment hub in Nigeria.

Speaking on behalf of the host communities, the Onilekki of Lekki, Oba Laisi Ogunbekun thanked the Presidential candidate of the All Progressives Congress (APC) Sen. Bola Tinubu for conceiving the Lekki Free Zone, where the port is situated.

Ogunbekun expressed continued support of all members of the Lekki community for development projects in the axis.

In a remark, the Managing Director of Lekki Port, LFTZ Enterprise, Mr Du Rougang thanked the host community for their cooperation.

Rougang said that the organisation would continue to work with relevant government agencies toward the growth of the economy.

Dignitaries at the event included the Minister of Transportation, Muazu Sambo, his Information and Culture counterpart, Alhaji Lai Mohammed, heads of government agencies in the transportation sector, traditional rulers in the Lekki community and top businessmen.