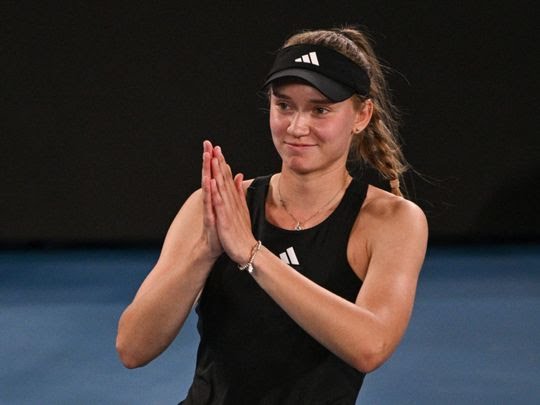 The Russian-born Kazakh looked sharp from the start and only a 25-minute delay to close the stadium roof against a passing shower prevented her from wrapping up the opening set within a half-an-hour of arriving on court.

Former French Open champion Ostapenko looked unable to cope with Rybakina’s pace and power in the opening stanza but ramped up her own fierce groundstrokes to break for a 2-0 lead at the start of the second.

Rybakina, who ousted top seed Iga Swiatek in the fourth round, broke straight back, however, and saved four break points with some brilliant tennis in the next game to consolidate.

The 23-year-old rode the momentum to break her Latvian opponent again for a 3-2 lead and then it was only a matter of looking after her impressive serve.

There were some jitters as Rybakina served for a place in her second Grand Slam semi-final but she sealed the deal on her third match point with her 11th ace of the contest.

“I’m super happy to be in the semi-finals for the first time,” said Rybakina.

“Of course, I was nervous, particularly in the last game, but I’m happy I managed my emotions. I played really well today.”

Ostapenko was clearly second best but might take solace at her best Grand Slam showing since she reached the Wimbledon semi-finals in 2018, a year after she won the Roland Garros title.

Rybakina, seeded 22nd only because ranking points were not awarded at last year’s Wimbledon, will next play the winner of Tuesday evening’s quarter-final between third seed Jessica Pegula and twice Melbourne Park champion Victoria Azarenka.

“For sure, I’m going to watch it,” she said. “But at the same time, I need to forget about tennis just for a few hours, to rest the mind, then prepare for another tough match.”