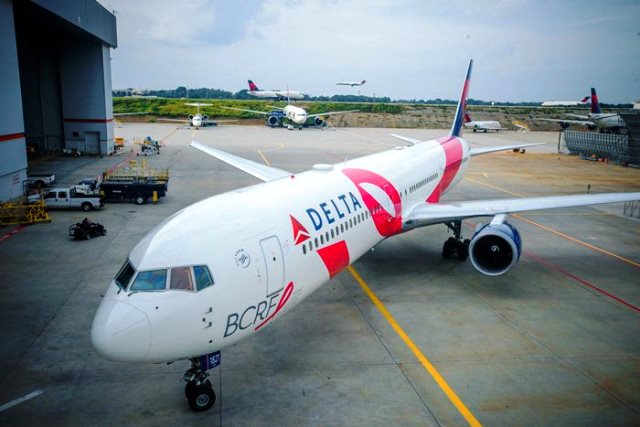 Ship 1821, the U.S. airline’s dedicated ‘Pink Plane’, is sporting an updated livery in time for Breast Cancer Awareness Month, which starts on October 1. The Boeing 767-400ER aircraft, which features a pink ribbon wrapped around its fuselage and the trademarked Breast Cancer Research Foundation (BCRF) pink ribbon logo adjacent to its boarding door, will be flying to destinations across Europe as part of Delta’s annual campaign in support of BCRF.

This year marks Delta’s 11th annual survivor flight, which will take place on October 1. The aircraft will carry more than 140 employee breast cancer survivors on board Delta’s newly painted pink plane on the flight’s first international route from New York City to Mexico City. Across the Atlantic, Delta’s pink plane is scheduled to fly to cities including: London, Madrid, Amsterdam, Frankfurt and Nice over the coming weeks.

“We are proud to showcase our commitment to a cure on a global scale,” said Sandy Gordon, Delta’s Vice President – In-Flight Service. “Our 80,000 employees worldwide look forward to this campaign each year and rally together to find new, innovative ways to generate awareness and funds for BCRF. We are grateful for our employees and customers for their continued passion and support as we work together to eradicate breast cancer.”

Since 2005, Delta employees, customers and their friends and family members have raised $9.2 million for BCRF, including last year’s efforts of $1.3 million. The collective contributions have also funded the vital work of 37 different research projects over the years.

To further raise awareness and support for breast cancer research, Delta employees will wear pink uniforms and sell pink products, including pink lemonade and pink headsets, on board and in Delta Sky Clubs throughout the month of October. Proceeds from the airline’s pink products will benefit BCRF.

Delta’s international Boeing 767-400ER, which has adorned a pink-themed livery since 2010, was due for a repaint this year. As a result, teams in Delta’s Marketing department as well as those in Delta’s TechOps division worked together to design a refreshed look while taking advantage of a unique paint formula to wrap the fuselage in a pink ribbon. In 2012 the aircraft was formally dedicated to the memory of Evelyn Lauder who founded the Breast Cancer Research Foundation in 1993. The aircraft flies international routes and will raise awareness for BCRF around the world this year. Delta’s first pink plane was a Boeing 757 that flew between 2005 and 2010 throughout the United States, Latin America and the Caribbean to generate awareness for the cause.