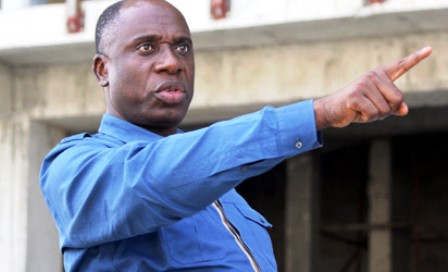 Rotimi Amaechi, the immediate past governor of Rivers State, has dared his successor to go to court if he had any allegation of corrupt practices against him.

In a statement Saturday, Mr. Amaechi said the Rivers State Judicial Commission of Inquiry instituted by Governor Nyesom Wike lived up to its expectations as “a shambolic inquisition panel” to indict him.

“Indeed, the Wike panel was an inquisition against Amaechi. Wike should go to court if he has any case of alleged corrupt activities against Amaechi,” said Mr. Amaechi.

“His panel is not and can never be a law court.‎”

The Justice Gabriel Omereji-led panel of inquiry submitted its report to the state governor, last Wednesday, urging for the recovery of N53 billion “stolen” from the State Reserve Fund.

According to the panel, the stolen fund was removed from the N55 billion left in the reserve fund between 2014 and May 2015.

“The money went to individuals,” Mr. Omereji told journalists in Port Harcourt after submitting the report.

“From the papers submitted to us, we also found out that the money was given to people they like.”

But in his reaction on Saturday, Mr. Amaechi dismissed the report, saying it achieved nothing but “political excitements, entertainment, and theatrics.”

“Crudely, without any sense of finesse or attempt to disguise its mission to ‘hack down Amaechi’, the Omereji panel did the bidding of its paymaster,” Mr. Amaechi said.

“As we earlier warned, it turned out to be a comedy, a circus show to grab media headlines with bogus, phantom and fabricated claims of corrupt practices against former governor Amaechi and officials of his administration.

Mr. Wike, a member of the Peoples’ Democratic Party, succeeded Mr. Amaechi (who defected from the PDP to the All Progressives Congress last year) as the governor of Rivers State on May 29th this year.

But there has been no love lost between both‎ politicians as they struggle for the control of the state.

Just before he left office, Mr. Amaechi instituted a panel of inquiry to investigate allegations of politically motivated killings during the general elections.

The panel, headed by Chidi Odinkalu, Chairman of the National Human Rights Commission, indicted the PDP in the state as well as former first lady, Patience Jonathan, among others in its report.

Apparently, as a move to counter his predecessor, Mr. Wike, shortly after he was sworn in as governor, instituted the commission of inquiry to investigate the sale of valued assets by Mr. Amaechi’s administration.

Mr. Amaechi said the panel instituted by Mr. Wike had a clear mandate to indict his administration at all cost.

“From the Chairman, to the way the panel conducted its ‘probe’ activities, it was obvious even to the blind that the Wike panel was on a mission to indict Amaechi,” he said.

“Video from the public hearing of the panel that has gone viral on the internet clearly shows the world the crude inquisition Wike conducted against Amaechi.

“At every point during the public hearing, Justice Omereji clearly showed his bias and his determination to indict Amaechi and officials of his administration. Most times, the panel chairman simply concluded that they are corrupt, even before all the facts are made known to the panel, even before all sides have been heard.

“On one occasion, Omereji said he wished the panel had the powers of a court so he could lock up, perhaps for life, these so called corrupt officials.

The former governor also said that witnesses who appeared before the panel were coerced, directed, ordered and told in clear terms, sometimes with written notes from the commission staff, what not to say and what to say.

“The chairman of the panel prevented counsels to those invited, from asking relevant questions that are likely to deviate and detract from their pre-determined agenda and conclusion,” he said.

“Lawyers and witnesses invited by the panel were constantly intimidated, harassed and bullied. Witnesses were constantly bullied to toe the line of the commission pre-determined agenda and conclusion.

“The panel chairman was ordering witnesses not to answer questions that would expose the commission’s bias to indict Amaechi.”

Related Topics:Amaechi dares Governor Wikesays Go to court if…
Up Next