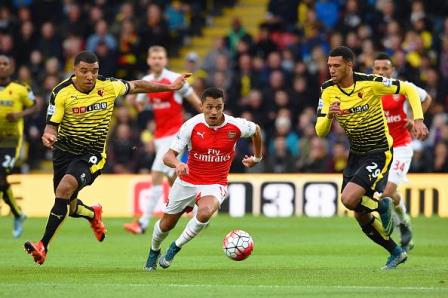 Alexis Sanchez continued his remarkable scoring streak as Arsenal regained second place in the Premier League table with a 3-0 win at Watford on Saturday.

The Chile forward opened the scoring in the 62nd minute to record his seventh goal in his last four Arsenal outings.

The 26-year-old also scored once for his country against Brazil and twice against Peru in 2018 World Cup qualifying, bringing his total since September 26 to 10 goals in just six games.

Arsene Wenger’s side have a home date with Bayern Munich in the Champions League on Tuesday and will go into that game having been tested in all areas of the pitch by Watford, who are finding goals hard to come by on their return to the Premier League.

Wins earlier in the day for Manchester City, Manchester United – who temporarily moved above Arsenal into second place – and West Ham United had put added pressure on the Gunners to perform at Vicarage Road.

Laurent Koscielny, back from a hamstring injury, ousted Gabriel in central defence in the only change to the side that had beaten United 3-0 directly before the international break.

That meant Theo Walcott continued up front, with Olivier Giroud forced to bide his time on the bench.

Arsenal applied early pressure and Watford goalkeeper Heurelho Gomes made a smart stop low down after Walcott had met Aaron Ramsey’s cross from the right with a cushioned header.

Sanchez, back from a profitable if lengthy trip to South America to represent Chile, was next to have a go, cutting in from the left and unleashing from outside the box, but again Gomes was able to save.

Watford responded with a fierce long-range drive from Troy Deeney, the captain that Petr Cech did well to beat away.

Arsenal almost opened the scoring in the 28th minute when a delightful ball to the back post from Sanchez picked out Ramsey’s run, only for the Wales midfielder to volley over.