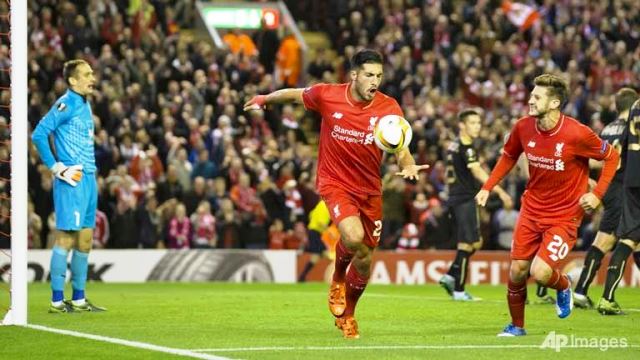 Jurgen Klopp’s Anfield bow as Liverpool manager ended in a 1-1 draw against Rubin Kazan in the Europa League on Thursday as fellow British hopefuls Celtic and Tottenham went down to defeat.

Emre Can cancelled out Marko Devic’s well-taken opener for Russian side Rubin to notch the first goal of the Klopp era, but despite playing against 10 men for 54 minutes following Oleg Kuzmin’s dismissal, Liverpool could not find a winner.

The fit-again Christian Benteke, on as a second-half substitute, came closest with a shot that hit the post, but he could not prevent Liverpool registering a third successive 1-1 draw in Group B and the second stalemate of Klopp’s tenure after Saturday’s 0-0 draw at Tottenham Hotspur.

The one consolation was that Liverpool held on to second place in the group ahead of next month’s return fixture in Kazan, although they are now four points below leaders FC Sion who won 1-0 at Bordeaux.

“When you come for the first time to a new house, you normally get a present,” Klopp said.

“I’m not satisfied with my present tonight, but it’s only the first time and I’ll come again. We’ll see next time. Maybe it’s better.”

Celtic were 2-0 down to Molde inside the first 18 minutes in a game which saw former Manchester United favourite Ole Gunnar Solskjaer take over for a second spell in charge of the Norwegian side.

Mohamed Elyounoussi made the most of a poor Dedryck Boyata pass before finding Ola Kamara who drove the ball past goalkeeper Craig Gordon after 11 minutes.

Seven minutes later it was 2-0 thanks to Vegard Forren’s left-footed effort.

Kris Commons reduced the deficit in the 55th minute for Celtic but Molde restored their two-goal advantage just a minute later through Elyounoussi.

Fenerbahce recorded their first win in the same Group A thanks to a last minute Fernandao strike against Ajax.

Molde lead the way with seven points, three ahead of Fenerbahce while Ajax and Celtic have two points each.

Tottenham slipped up 2-1 at Anderlecht despite Danish midfielder Christian Eriksen giving them the lead after just four minutes.

But Anderlecht, who lost to the north Londoners in the 1984 Uefa Cup final, were back level before the quarter of an hour when right back Guillaume Gillet volleyed in a corner past Hugo Lloris.

Anderlecht bagged the points on 75 minutes when substitute Frank Acheampong crossed from the left for in-form Italian Stefano Okaka to charge into the box to slide the ball past Lloris despite one of his boots having fallen off.

Anderlecht moved up level with Spurs on four points in Group J topped by Monaco, 1-0 winners over Qarabag.

Struggling French giants Marseille, who are hovering just above the relegation zone at home, were defeated 3-2 at Portugal’s Sporting Braga, the 2011 runners-up with three goals coming in the last six minutes.

Ahmed Hassan and Wilson Eduardo put Braga in the driving seat at 2-0 before Romain Alessandrini and Michy Batshuayi appeared to have rescued a point for Marseille.

But Alan struck for the home side in the 88th minute to grab a dramatic winner after Marseille goalkeeper Steve Mandanda had flapped at a cross.

Braga lead Group F with a maximum nine points with Marseille six off the pace.

Italian Serie A leaders Fiorentina came unstuck 2-1 at home to Lech Poznan of Poland to leave them propping up Group I.

In Rome, Lazio were down to 10-men after six minutes when Mauricio was sent off after a foul on Jorgen Skjelvik.

Despite the numerical imbalance Alessandro Matri slotted the ball home to fire the Italians into a first half lead with Felipe Andersen and Antonio Candreva completing a 3-1 defeat of Rosenborg to leave them three points clear in Group G.

Fellow Italians Napoli scored three first-half goals to set up a 4-1 win over Midtjylland of Denmark with Manolo Gabbiadini grabbing a brace.