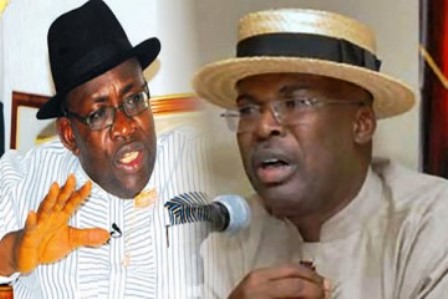 The leadership of the All Progressive Congress (APC) in Bayelsa State has threatened to write to the Economic and Financial Crime Commission (EFCC) over alleged plan by the Governor Seriake Dickson administration to divert N45billion loan procured for the State Airport project.

The party said the plan was being masterminded with the project contractor to tamper with the terms of the loan and remove the clause on the presentation of milestone certificate needed to access the fund.

The APC, through the Director of Publicity for the Sylva/Agiri campaign organization, Chief Nathan Egba said though the earlier alarm raised by the Party was to the effect that the Governor Seriake Dickson administration had planned to procure a N12.5billion loan through the approval of the State House of Assembly, the recent disclosure on the N45billion loan diversion was a self-confession from the PDP.

According to Nathan Egba, “The burning issue of a fresh loan the present administration is trying to take, ostensibly to be used for their PDP campaigns and forthcoming elections. The initial information we had, was the N2.5billion naira and the N10billion the PDP government was trying to structure through the State House of Assembly. But as you are all aware, the government has admitted they are in fact targeting about N45billion naira instead.

“Their claim is that this is an already approved loan, but what they did not tell Bayelsa people and indeed, the whole world, is that they have tampered with the original terms of the contract on the Airport project to pave way for them to draw on the loan. They have committed Bayelsa to this whooping amount of N45billion naira for the Airport project, on the condition that the contractor will draw on the presentation of milestone certificate.

“However, as everybody in Bayelsa State knows, not only has the project comes to a halt but the site has been overwhelmed by flood waters. Consequently, there cannot be milestone certificate to be presented for the contractor to draw from the loan to enable the outgoing Governor, Hon. Seriake Dickson and his party, the PDP, to fund their elections expenses.

“So, what do they do? They got together with the contractor to alter the terms, remove the clause that stipulate milestone certificate as condition to draw down. This now gives them opportunity to freely draw from the loan unhindered. With the claim, they want to pay the contractor but in fact, such monies will now be used to kick start their campaign which has been moribund due to lack of funds occasioned by the inability of the Governor to effectively manage state finances.”

Egba warned that the APC have alerted the operatives of the EFCC and are monitoring the situation as they unfold.

But the Chairman of the State Media Team of the Restoration Campaign Organisation of the Governor, Hon. Dan Kikile, dismissed the claim by the APC and declared that the PDP does not need to divert loan to fund its campaign, “we do not need any loan to fund our campaign. We will not even use it. The Airport project is one of the flag ship of this administration because it will create a new economic status for the State.”

“The Airport project is over 60 percent completed. What we are asking the APC is to focus their campaigns on what they have done in the past. We also know that APC is a party founded on propaganda.”

New PH airport terminal to be commissioned in 2016, says Dunoma