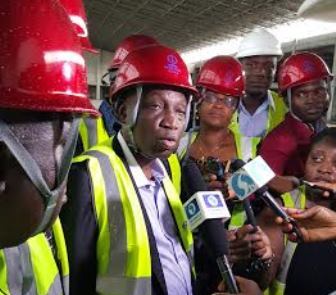 Engineer Saleh Dunoma, Managing Director of the Federal Airports Authority of Nigeria (FAAN) has expressed the hope that the new Port Harcourt International Airport terminal and the remodelled old terminal would be commissioned in 2016.

Engineer Saleh Dunoma, Managing Director of the Federal Airports Authority of Nigeria (FAAN) during a working visit to the Port Harcourt International Airport terminal on Wednesday

He made this remark on Wednesday when he paid a working visit to the airport to supervise the on-going construction works at the airport.

It would be recalled that the Federal Government has embarked on an ambitious project of constructing five new international terminals at the nation’s five international airports including Lagos, Abuja, Kano, Port Harcourt and Enugu.

Dunoma, accompanied by Engr. Ogunode Olufemi, Director of Maintenance and Engineering, Capt. Henry Omeogu, Director of Airport Operations and other top officials of the Authority, was conducted around the new projects at the airport by the Regional Manager, South South/South East, Dr. (Mrs) Anne Egbadon-Enyinnaya and the Port Harcourt Airport Manager, Engr. Chigbo Nwobu.

While on the working tour to the airport, the FAAN boss noted that this laudable project has obviously created some discomfort to the travelling public and other airport users. Nonetheless, he assured the public that the situation was under control as FAAN was doing everything possible to proffer solution to the challenges faced by all airport users, within the shortest time possible.

He craved the indulgence of the general public while the construction works would last at the new ultramodern international terminal and the remodelled old terminal, which would be commissioned simultaneously in 2016; noting that the project would increase capacity and ensure delivery of efficient services at world-class standards and best practice as prescribed by the International Civil Aviation Organization, ICAO.

He also assured the general public that FAAN would continue to upgrade facilities at the nation’s airports to ensure security, safety and comfort of all airport users.

Related Topics:New PH airport terminal to be commissioned in 2016says Dunoma
Up Next

Why we staged walk out on Amaechi – PDP Senate Caucus