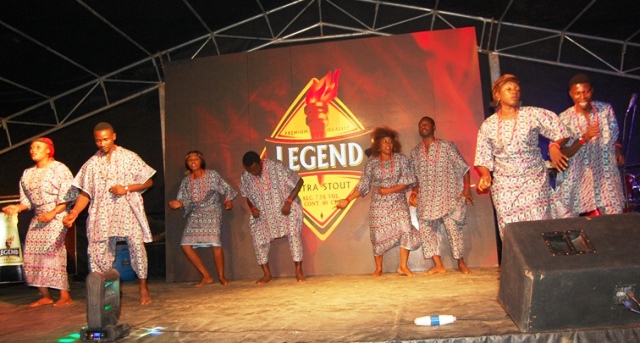 As more winners continue to emerge in the on-going Legend Extra Stout Taste and Tell campaign, the Harmony Cultural Group displayed the rich cultural heritage of the Emirate with the Baalu dance.

According to Music Director of the group, Dosu Babalola, the dance was specially performed to highlight and extol the qualities that make Legend Extra Stout Nigeria’s fastest selling stout brand.

One of Nigeria’s finest music artists May D was on hand to thrill the crowd with a medley of his hit songs. The music act who was accorded a rousing welcome by the charged crowd kept them dancing and singing for a considerable period at the event.

Similarly, a local-based rap artist, BMD drove the crowd into frenzy with his impressive raps and rhymes.

One of the winner of Legend Extra Stout Taste and Tell Campaign, Mr. Abdulrahman Shehu, a motorcycle operator in Ilorin has said he will restart his barbing shop with his winning. Narrating his ordeal before winning the generator, Abdulrahman stated that after his internship as a barber a couple of months back, there was no money to buy a generator to power his barbing shop. Hence, he veered into riding commercial motor bike (Okada) to raise money to buy one for his trade.

A few more months down the line, he still could not afford a generator but his dream became a reality when he won a generator at the Ilorin leg of the Legend Extra Stout Taste and Tell night that held in the city.

There were many winners but 26 year-old Abdulrahman appeared to be the happiest because a pressing need had been met. Speaking in an interview with journalists, he said he was deeply touched by the fortune that came his way. “I am very happy today because I have always wanted a generator for my barbing shop.

Power is not constant and because of that, if you don’t have a generator, you can’t do the type of business I do. So I decided to lease and ride okada to raise money for the generator but today because of Legend I now have a generator for my business”, he enthused.

He said he was excited to go back to his shop given the risks he had been exposed to while riding commercial motorcycle. Abdulrahman expressed appreciation to Legend Extra Stout for empowering him via the Taste and Tell campaign. He said the unique consumer reward scheme has saved him from the hazards of okada business and pledged to continue patronizing the brand.

Similarly, other participants who correctly answered question relating to the brand in a question and answer session that night won prizes included LED television sets and other consolation prizes.

The market activation offered quality entertainment and relaxation for residents of Ilorin who trooped to Savannah hotel to witness the event.