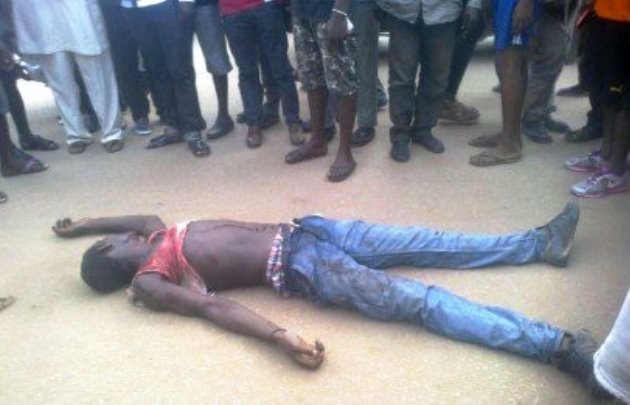 An Indigenous People of Biafra (IPOB) protester was on Friday reportedly shot dead by one of the soldiers who shot into the air to disperse protesters at Ochanja, Onitsha, the commercial city of Anambra State, South-east Nigeria.

According to an eye-witness from the scene said that the protest which also reached the Ochanja area of Onitsha, saw one of the protesters allegedly shot dead by an accidental discharge from the shots of a soldier, in a bid to quell the raging protest.
The protesters grounded all commercial and vehicular activities in Onitsha, during the 1 Million March, to call for the immediate release of their leader, Nnamdi Kanu, who is still reportedly being detained by the Department of State Services (DSS).
Kanu was arrested by the DSS on his way into Nigeria from UK.
Motorists and other road users however described the protest as a mother of all protests.
Commuters and motorists who were leaving and entering the south-east, through the River-Niger Bridge, in Onitsha, were held to standstill for over six hours, as members of IPOB in their thousands, barricaded the entry and exit routes of the Head Bridge.

Police IG warns pro-Biafrans against planned violent protest
According to an eye witness, Mr. Kelechi Amaeze, who was travelling from the south-east to Lagos told our correspondent that thousands of travellers, including himself, were held to standstill at the Onitsha head-bridge owing to the protest, which members of IPOB had tagged, “One Million Match”.
Another eye-witness, who pleaded not to be named, said the IPOB protesters where already taking their demonstration into Asaba, the Delta State capital, but where stopped by security operatives in the state, who had already re-mobilised on getting a tip-off of the protest.
It was however gathered that the armed-to-the-teeth security operatives barricaded the exit point of the Head Bridge into Asaba with an Armoured Personnel Carrier to stop the irate protesters from gaining entry into the south-south region.
Meanwhile, at the time of filing this report, it was not certain if the irate youths took their protests to other parts of the country.

Related Topics:Soldier killed pro-Biafra protester in Anambra
Up Next