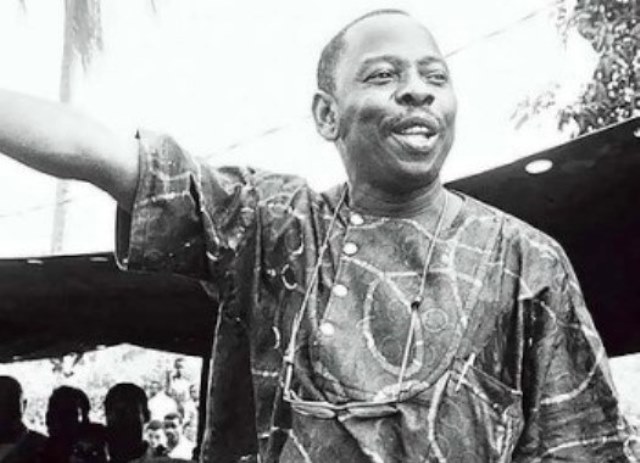 As we mark 20 years of the hanging of Ogoni rights campaigner, Ken Saro-Wiwa tomorrow amid reports that the Nigerian Customs would not allow his memorabilia into the country, I bring to reader’s memory the cause Nigeria killed him for in his statement of defense before the tribunal that sentenced him to death.

“The demand for the control of economic resources is naturally concomitant with political control. It is wrong that the resources of the Ogoni people should be used to develop other Nigerian ethnic groups and to the exclusion of the Ogoni themselves. Since Nigeria is a federation, each ethnic group should control its resources, contributing only what it can to the federal purse for the use of agreed federal services. The practice in Nigeria today where the military dictator or a civilian ruler backed by a pliant army arrogates to himself all the resources of the country and proceeds to share it out to cronies and favoured groups is tantamount to armed robbery. It is irrelevant to argue that such sharing is backed by decree or by law. Who makes the decree or law? Are the owners of the resources adequately represented at the making of such decrees and laws? Do their views matter? The answer is, no. And to that extent, it is neither fair nor proper.

Some may argue that the Ogoni argument derives from the fact that Ogoni has oil and gas. This is not necessarily so. Indeed, the argument of the Ogoni, fleshed out in part in the Ogoni Bill of Rights is that oil and gas have only brought misery to the Ogoni people, oil exploration has deprived them of farmlands and polluted their streams, gas flared into the air has poisoned the air and has, by flaring day and night, stopped fishes from spawning and driven all wildlife away. Gas flaring also leads to acid rain which renders the soil infertile. Moreover, the presence of oil and gas does not mean automatic wealth. If it were so, Nigeria should be rich, and not a debt-ridden country with educational, health and other services in a parlous state, its people hungry and malnourished. The only beneficiaries of oil wealth are the multi-national oil companies and their shareholders.

In demanding the control of their economic resources in a situation where they are in control of their environment, the Ogoni expect to be able to determine whether they will return to the situation before 1958 when there was no oil, yet the people were well fed and the children were in school, the present was tolerable, and the future hopeful.

The above may be academic; the reality is that before and immediately after independence, the Region where a particular product was found benefitted first by the presence of that product in its vicinity. The Region of origin of oil had fifty per cent of the proceeds of oil. It was only after the civil war that this share was whittled down to a negligible percentage, thus increasing the feelings of exploitation and economic slavery. Royalty is, by definition what is paid to a landlord for a mineral that is found under his soil. By seizing oil royalties as the Nigerian nation state now does, owners of oil-bearing land are being cheated. This is not acceptable. The Ogoni demand that it be given a fair share of its economic resource is equitable, fair and morally justified.

The environment is man’s first right. Without a safe environment, man cannot exist to claim other rights be they social, political or economic. The fact for the Ogoni is that not being in control of their environment, their very existence is seriously threatened. Oil exploration and exploitation carried out by Shell and Chevron in Ogoni with reckless abandon for the environment has been omnicidal. Even worse is the fact that the Ogoni do not know exactly what their resources of oil and gas are and since they do not determine how much of the oil is mined, they cannot ensure the sustainable development of the community.

It is futile to argue that the Federal Government of Nigeria knows. The question the Ogoni people ask is, if after an estimated 30 billion dollars worth of oil has been taken from their land, they have nothing to show for it, what assurance do they have that when the oil runs out, as it surely must, they will be cared for? So important is this matter that I do not expect the Ogoni people to permit any further oil activity on their land until it has been properly negotiated.

It is clear to the Ogoni people that the wanton devastation of the Ogoni environment in which Shell engages arises from their racist contempt for the black man. Otherwise, how else can the Company justify its environmental practice n Ogoni which is so much at variance with the Company’s practices in the developed world? The double standards practised by this company is not acceptable and the Ogoni must protest it determinedly with all the energy at their disposal.

In expressing their discontent over the destruction of their environment, the Ogoni perform an important civic duty which other communities in other oil-bearing areas of the country will be well-advised to copy.

The last fundamental demand of the Ogoni Bill of Rights is for adequate and fair representation as of right in all Nigerian national institutions. Again, this is no exceptional demand. The principle of quotas for jobs in Nigeria has been accepted. However, by basing these quotas on states, the principle is unfairly operated in favour of those ethnic groups which have states to themselves or exist in a multiplicity of states.

They thus not only enjoy the numerous jobs created in their states, but also dip their hands into the federal jobs pie. This is a cheat, more annoying because it is so brazen and conduces to the deprivation of the already disadvantaged. In a situation where jobs are not advertised but offered below the table and where qualification is not so important as the ethnic origin of applicants, the deprived must loudly protest their deprivation.”