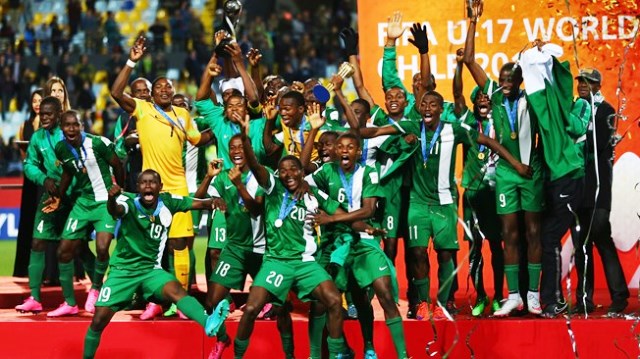 Nigeria’s Golden Eaglets have emerged champions of the Fifa Under-17 World Cup in Chile after defeating Mali 2-0.

The Cup triumph means that the Nigerians have successfully defended the title they won two years ago in the UAE.

Two quickfire second half goals from Victor Osimhen and Funsho Bamgboye ensured that Emmanuel Amuneke’s men cruised to victory as Nigeria claimed their fifth world title at under-17 level.

The Nigerians should have gone in front in the fourth minute of the game but Osinachi Ebere’s spot kick was saved by the Malian goalkeeper, Samuel Diarra, after Chato handled the ball in his box.

Ebere had a second bite on the cherry to score from Diarra’s save but his header just grazed the crossbar and bounced back into play before the Malian goalkeeper then claimed the ball later.

Boubacar Traore then forced Nigeria goalkeeper Akpan Udoh into making a big save.

The Malians made life a bit difficult for Nigeria by pressing them very high and that denied the world champions the chance to express themselves.

The defending champions were always second best when it came to the second balls as the Malians looked quicker in winning the ball in such battles.

The high-pressing Malians reduced Nigeria with trying from range as Kelechi Nwakali produced a screamer but saw it go off target though Diarra had his goal covered.

Funsho Bamgboye should have given Nigeria the lead with eight minutes to the break but his headed attempt was cleared for a corner after superb work from Samuel Chukwueze.

Just before the break, the tournament leading scorer Osimhen had his first real attempt at goal and though the effort of the Nigerian striker looked to be heading off target, Diarra refused to be caught unawares as he sprawled on the turf to turn the ball away to safety.

The Golden Eaglets started the second 45 minutes better as Chukwueze and Osimhen made Diarra pull off two saves within eight minutes of the restart.

The champions continued to dominate and it was Udochukwu Anumudu’s turn to have a go at the Malians.

Nigeria opened score in the 56th minute and it had to be Osimhen who rifled the ball past Diarra from Chinedu Madueke’s low cross.

The goal was Osimhen’s 10th of the tournament and it meant the 16-year-old forward has set a new record of scoring the most goals in a single Fifa Under-17 World Cup edition.

It was a crazy three minutes for the plucky Malians as Bamgboye’s left-footed effort left Diarra rooted to the spot after the champions benefited from a gaffe at the back by their opponents.

With two goals to their good, the Eaglets looked in command and the gritty Malians were always going to find it hard clawing their way back.

Udoh in Nigeria’s goal had to make three big saves including an important one with three minutes to time in order to preserve his team’s two-goal lead.

Amuneke’s team held out their two-goal lead in the three minutes of stoppage time to be crowned champions for the fifth time in the history of Fifa Under-17 World Cup.

It is the first time that the Nigerians are winning the title outside of the Asian continent. Their previous successes have been in China in 1985, Japan in 1993, Korea Republic in 2007 and UAE in 2013.

Related Topics:Nigeria stun Maliretain U17 World Cup trophy
Up Next