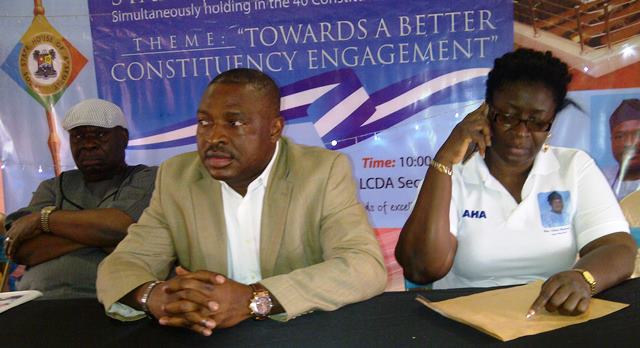 Member of the Lagos State House of Assembly representing Lagos Mainland Constituency 2, Moshood Oshun, has said lawmakers in the state cannot fail their constituents because the template for successful representation has been laid by successive governments since 1999.

Oshun, the chairman of the Public Accounts Committee for State, said this when he presented his score-card to his constituents at a town hall meeting held at the premises of the Yaba Local Council Development Area of the state.

Oshun, who read a speech that began with the history of the emergence of the Lagos State House of Assembly, recalled how former governor of the state, Lateef Jakande, brought prosperity to the state and “laid the foundation for the enviable quantum leap in socio-economic, infrastructural development and rapid transformation in the state between 1979 and 1983.

“Lagosians today, including myself, are beneficiaries of the strategic planning, and architectural masterpiece of the government of that time with regards to not just accessible education, but free qualitative education and medical services.”

Oshun noted that many of the existing infrastructures across the state including general hospitals, water works, and housing estates had their foundations laid during the government of Jakande.

He said years after the Jakande era, Lagos has remained a reference point for the other 35 states of the country.

“In September this year, we still received a letter from a state legislative House in far-away Kenya seeking to visit the Lagos State House of Assembly to learn from its experiences, progressive skills and people-oriented legislations that had been instrumental to the development of the state and this is just one of the many international visitors we receive annually,” Oshun said.

He told the people that the Assembly always puts them first in everything that it does adding that there can never be any meaningful development without consulting and representing the people.

“The founding fathers of the Assembly have laid the right foundation of excellence for us to follow and for which we cannot afford to betray or fail you,” he said stressing that this was the reason for the town hall meeting.

Oshun, who noted that the legislature is always the victim of change in government, especially the military take-over, reminded the constituents that a lawmaker’s duties include making of laws, carrying out oversight functions, ensuring checks and balances in government and such related functions.

Stressing that he had not let the people down, Oshun further told them that he had sponsored and co-sponsored seven motions, one of which was the one that necessitated the summoning of the management team of the State Traffic Management Authority.

“Since the commencement of the current eighth Assembly in June 2015, a total number of 28 resolutions have been passed covering a broad range of socio-economic, political and other issues pertaining to the welfare of Lagosians, the progress of the state and the nation as a whole.

“We have, in the course of our legislative duties, settled communal clashes, played the Ombudsman’s role while not neglecting several petitions refreed to us for mediation and resolution,” he said.

He told them he had two constituency offices and appealed to the constituents to make good use of the offices. He added that he was accessible.

He reminded them of how his effort to bring a vocational centre to the constituency was thwarted by the people. Today, he said, the centre has been built in the Mushin area of the state.

He also reminded the constituents of how the implementation of the street lighting project he lobbied to bring to area was almost frustrated saying things like that would not bring development to the area.

In a short speech, Bola Lawal-Olumegbon, the Executive Secretary of Yaba Local Council Development Area, noted that the town hall meeting was a good idea that would enable the people air their challenges and support the lawmakers to carry the challenges from there.

The event was attended by top members of the All Progressives Congress, APC, in the constituency.

Some of the community leaders complained that the boreholes constructed for them by the government have refused to pump water. They also pleaded with the lawmaker to pressurise the state government to fix some schools and roads in the area that are already becoming eyesores.

While pleading that some police posts in the area be converted to police divisions, some of them also called for the involvement of community leaders in the implementation of future projects so as to make it easy to ward off those who would want to frustrate the projects.

They also called for adequate funding of the security agencies in the state saying the police, for example, know the hide-outs of criminals, but are not adequately encouraged to confront the criminals and sack their hide-outs.

He however promised to fix the bore-holes that the constituents said the government provided but which are not working.

Oshun used the opportunity to call for the creation of state police.

According to him, all advanced countries of the world have various kinds of police. He said it was appaling that Lagos with a population of about 20 million only struggles with about 22,000 police.

He said if not for the effort of the State Security Trust Fund that has provided for policemen in the state, crime rate and other vices would have been worse than what they are in the state currently.