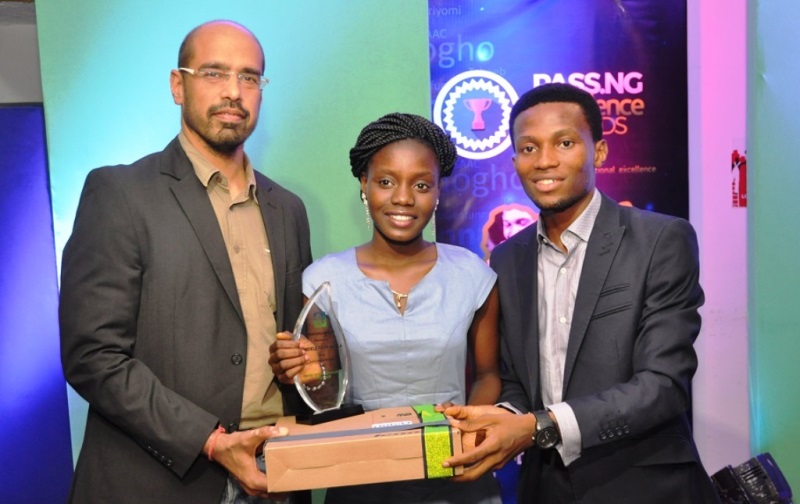 Airtel Nigeria, has thrown its weight behind the maiden edition of the Pass.Ng Excellence Award 2015, organized by examination preparatory and e-testing platform, Pass.ng, to honour 10 outstanding students in the 2015 Unified Tertiary Matriculation Examination (UTME) JAMB examination.

L-R: Vice President, Digital Services, Airtel Nigeria, Nitin Anand; one of the outstanding students in 2015 UTME and Pass.ng Awardee, Wasiu Abiodun with his mother, Mrs. Abiodun during the award presentation at the Pass.ng Excellence Awards 2015 held in Ikoyi, Lagos on Friday.

The Pass.Ng award is aimed at promoting and rewarding academic excellence among students in Nigeria. It is scheduled to hold on Friday, December 4th at Sofitel hotel, The MoorHouse, in Ikoyi, Lagos, with notable individuals from the education sector, students and other stakeholders billed to grace the occasion.

Commenting on the Award, Chief Executive Officer, Pass.ng, Mr. Samson Abioye, said the aim of the initiative is to underscore the importance of excellence in education to national development.

“The excellence awards is geared towards rewarding our users who not only made us proud but did excellently well in this year’s UTME JAMB. This year, about 1.5 million students wrote UTME and a 100,000 of them used our platform to prepare for the exam. We are glad to say that over 60 per cent scored 200 and above. This is a remarkable achievement. We hope to increase this figure yearly.

“With the excellence award, we hope to encourage students to be committed towards hard work and diligence, especially in the pursuit of their careers. We believe the award will create a healthy competition among students and also reduce massive failure rate experienced yearly in the UTME exams.”

Abioye hoped that the top 10 students will serve as role models to other students. They will each be awarded prices including laptops and scholarship for overall best.

It would be recalled that Pass.Ng emerged one of the winners in the Catapult-a-Startup initiatives of Airtel Nigeria which was aimed at supporting startup app developers in Nigeria.

Pass.ng is a web, desktop and mobile-based CBT examination preparatory and testing platform, with a vision to help candidates excel in all the major Nigerian Examinations and tests.