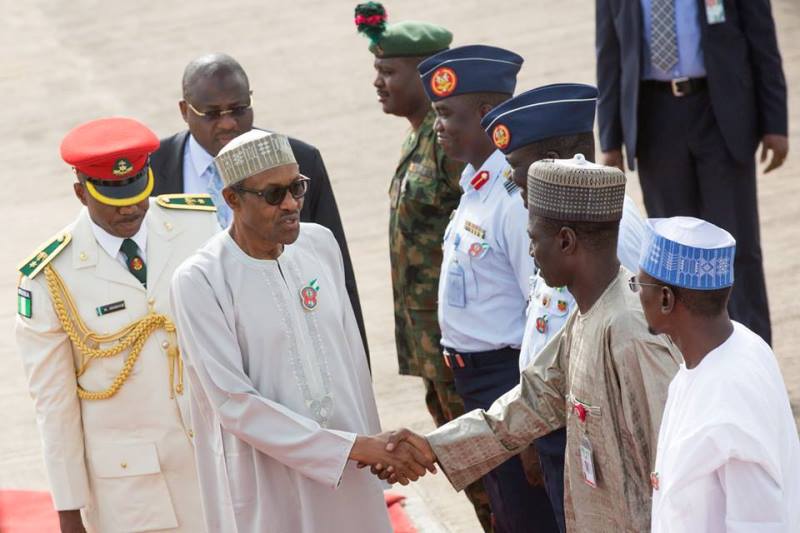 President Muhammadu Buhari, Thursday evening arrived in South Africa for the Forum on China-Africa Cooperation (FOCAC) with other 84 delegates from Nigeria.

He touched down at the Waterkloof Air Force Base proceeding to Johannesburg where the forum will be taking place.

Buhari will join other leaders on Friday morning for the FOCAC opening.

He will also meet with business leaders from China and Africa.

In the evening, he would hold bilateral talks with President Xi Jinping of China – a follow up to his meeting with the Chinese leader which took place in New York on the sidelines of the United Nations General Assembly meeting in November.

President Buhari is also expected to discuss ways of removing all obstacles in the way of the 3,050 megawatts Mambila Power Station, considered a strategic project which was conceived in 1982 but has not taken off.

The Senior Special Assistant to the President on Media and Publicity, Garba Shehu, had said in a statement that the Chinese President had informed President Buhari of the willingness of his country to finance the whole project through a special loan agreement.

“Of particular interest is the coastal railway project stretching for 1402 kilometers linking Lagos in the West with Calabar in the East; a project that is expected to be financed with 12 billion U.S Dollars Chinese loan and which will create about 200,000 jobs.

“Another rail project that will be up for renegotiation is the 8.3 billion Dollars Lagos-Kano standard gauge modernisation project, of which only a segment, Kaduna-Abuja has reached completion stage”, the statement read.

On the Nigerian delegation are the Ministers of Foreign Affairs, Geoffrey Onyema; Minister of Transport, Chubuike Amaechi; and the Minister of Industry, Trade and Investment, Okechukwu Enelamah.

Related Topics:China-Africa forum: Buhari arrives S’Africa with 84 delegates
Up Next