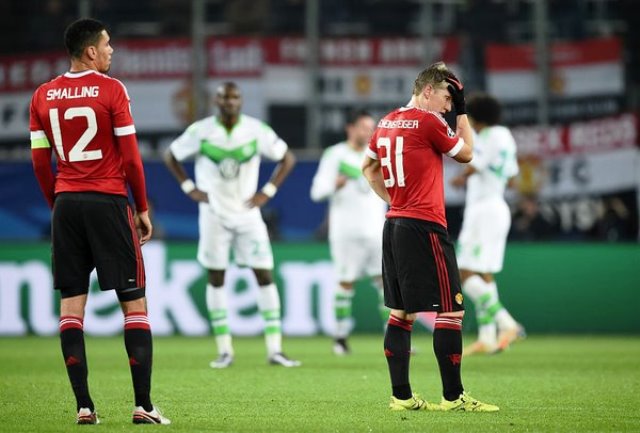 Manchester United crashed out of the Champions League on Tuesday after a 3-2 defeat at Wolfsburg, as the Germans punched their ticket to the last 16 along with Group B rivals PSV Eindhoven.

Louis van Gaal’s United made a promising start at the Volkswagen Arena as Anthony Martial handed them a 10th-minute lead but the Red Devils’ poor defending at set-pieces cost them dearly with Naldo equalising shortly after.

Julian Draxler set up Vieirinha to round off a sublime team move and put Wolfsburg 2-1 ahead just before the half hour.

But United clawed their way back into the game eight minutes from time when Josuha Guilavogui headed into his own net.

However, Naldo grabbed his second of the night shortly after as he headed home a corner to consign United to a third-place finish and a spot in the last 32 of the Europa League.

“We’re disappointed. But if you look back we should have won our last game at home to PSV,” lamented midfielder Marouane Fellaini, talking to BT Sport.

Winger Jesse Lingard, who saw a first-half effort ruled out for offside, added: “Over the whole course of the competition, we haven’t done well enough to qualify.”

In the Netherlands, it had looked for a short time as if CSKA Moscow could spare United’s blushes when Sergey Ignashevich converted a 76th-minute penalty to put CSKA 1-0 up against PSV.

But the Dutch side hit back just two minutes later through Luuk de Jong and completed the turnaround with five minutes to play as Davy Propper earned the home side a 2-1 victory, ensuring they went through as runners-up behind Wolfsburg.

Manchester City wrested away top spot from Juventus in Group D as Manuel Pellegrini’s side claimed a thrilling 4-2 victory over Borussia Moenchengladbach, while last year’s finalists succumbed to a 1-0 defeat at Sevilla.

David Silva had given Manuel Pellegrini’s side a 16th-minute lead at the Etihad Stadium but Julian Korb levelled three minutes later before Raffael turned home before the break to put the Germans ahead.