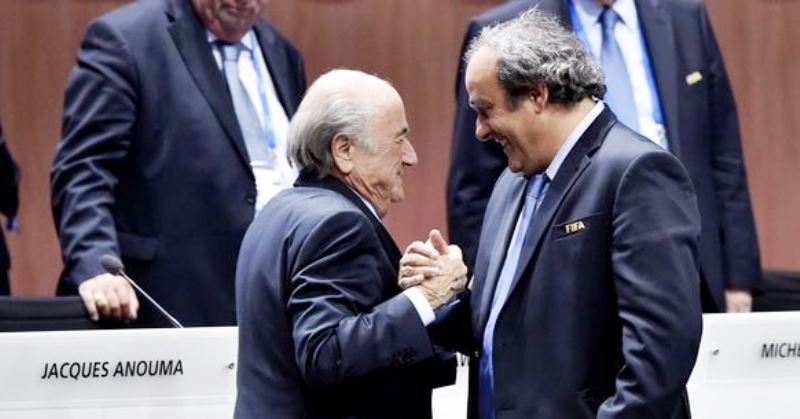 Sepp Blatter and Michel Platini remained defiant on Monday despite being banned from football by Fifa.

Both men vowed to keep fighting in their own defence after being suspended for eight years over an ethics violation.

Blatter, Fifa’s president since 1998, said he had been “betrayed” by the ethics committee which levelled his suspension and accused judges of ignoring key evidence he believes should have cleared his name.

The 79-year-old Swiss national said he would “immediately” appeal to a Fifa committee against the ban, before taking his case to the Court of Arbitration for Sport (CAS) in Lausanne if need be.

Platini, head of European federation Uefa and a Fifa vice president, had even harsher words for the ethics judges who threw him out of the game he had been poised to lead.

He said the Fifa decision was a “masquerade” intended to “sully” his name.

The Fifa court ruled that both men abused their positions over a 2 million Swiss franc payment Blatter authorised to Platini in 2011, reportedly for work done a decade earlier.

Shortly after the verdict was announced, Blatter addressed the world media at the Sonnenberg conference centre in Zurich, which symbolically is the site of Fifa’s former headquarters.

Unshaven and with a plaster bandage on his cheek, Blatter was flanked by his daughter Corinne, who has long been one of her father’s most outspoken defenders.

“You ask me if I feel betrayed… the answer is yes,” Blatter said in response to a question, adding that he was “astonished” judges had rejected evidence in his defence.

He said he had become a “punching ball” and that he was “sorry for Fifa”, shaken by an unprecedented scandal which has seen 39 people indicted by the US justice department over corruption and bribery going back decades.

Days after the scandal kicked off in May, Blatter promised to stand down when his successor was chosen by Fifa’s 209-member associations at a congress later set for February.

But his goal was to remain in office for that vote and to preside over a last major Fifa meeting before retirement.

“Let me work at this Congress. Let me do it,” Blatter said in an interview with Sky News, restating his desire to leave Fifa on his own terms.

There has been speculation that Blatter authorised the payout to Platini in 2011 to secure the Frenchman’s backing for his presidential re-election bid that year.

“It was not a bribe and there was no help from Europe in any election in 2011,” Blatter told Sky. “Never in my life would I offer money to get something.”

Platini’s criticism of Fifa’s ethics watchdog has escalated throughout the inquiry and his condemnation continued on Monday.

“I am convinced that my fate was sealed before the hearing of December 18 and that this verdict is just a pathetic coverup for a desire to eliminate me from the world of football,” the ex-Juventus star said in a statement sent to AFP.

Unlike Blatter, he boycotted his hearing before judges in Zurich last week.

Aside from a CAS appeal, Platini said he was “determined to apply at the right time, to civil courts to obtain damages for all the prejudice I have suffered over very long weeks”.

Platini had been the favourite to succeed Blatter as Fifa’s president, but his campaign has been stalled by the ethics inquiry and his chances of winning have almost certainly been crushed, even if he overturns the ban on appeal.

The downfall of both men began in September, when Swiss prosecutors revealed a criminal investigation against Blatter, partly over the infamous 2 million Swiss francs payment.

Platini has been questioned in the Swiss case, although he is treated as something between a witness and an accused. (AFP)