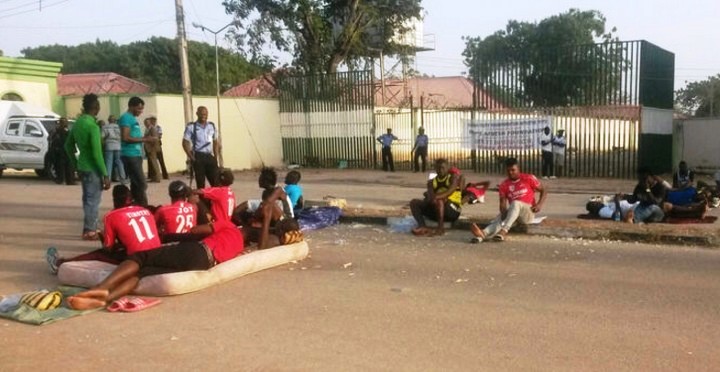 Protesting FC Taraba players have been asked to wait until Tuesday to know the relief package the government has for them.

The demoted side’s players have been sleeping in the open for the past eight days outside the government house gate protesting non-payment of their 11-month salaries and other entitlements.

Unnamed source on Monday said the Secretary to the State Government (SSG), Commissioner for Sports and management, among others, engaged the distraught players in a dialogue aimed at resolving the impasse but achieved almost nothing at the end of the day-long discussion.

“Since morning (Monday) we have been in a marathon meeting with the SSG, Commissioner for Sports and other top government officials over the lingering 11-month unpaid salaries but there is no resolution yet.

“We were asked to come back tomorrow (Tuesday) when the deputy governor is expected to come up with a memo that will address our plight.

“However, it remains uncertain what the extent of the relief package will be as the SSG refused bluntly to disclose what the package would involve.

“The SSG said the deputy governor will come up with a memo to give an order to the accountant general to give us something on or before Christmas.

“We insisted on knowing exactly how many months they are paying us for but the officials stood their ground that they won’t want to commit themselves till the deputy governor unfolds the package.

“The SSG thereafter asked us to roll up our sleeping foams, but we told him after eight days an extra day in the open won’t kill.

“The meeting didn’t achieve anything concrete to address our plight; they didn’t show the seriousness the situation on ground demands.

“We have returned to the gate once again to pass another night hoping that Tuesday’s discussion will yield the expected dividend,” said the source to supersport.com.

Related Topics:Unpaid salaries: FC Taraba talk resolves nothing
Up Next