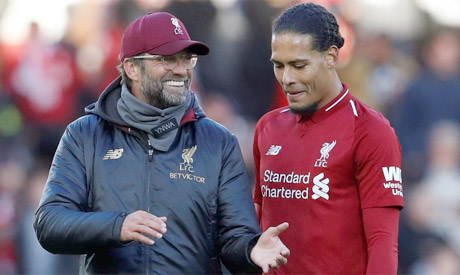 Liverpool manager Juergen Klopp’s passion and habit of getting straight to the point sit well with the club’s players, defender Virgil van Dijk said on Sunday.

English Premier League (EPL) leaders Liverpool are chasing their first league title since 1990 and Van Dijk said Klopp could be brutally honest when assessing their performances.

“He’s (Klopp) very passionate, he’ll tell you the truth at all times,” Van Dijk said on The Premier League Show.

“He won’t go beating about the bush. That’s something I personally like a lot and most of our players like it as well.

“We have plenty of meetings throughout the whole season where he is definitely not happy about some things.

“That’s a good sign, even when we’ve only lost one (league) game all season there have been some moments where we can do much better.”

Liverpool have the best defensive record in the league, having conceded 18 goals in 31 games, but Manchester City can leapfrog their rivals if they win their game in hand.

However, Van Dijk said the title race will go down to the wire.

“That’s the unlucky bit for us, that they (Manchester City) have been fantastic throughout the whole season. We have been doing in the league fantastically as well,” Van Dijk added.

“It’s something good for people that love football to see. I have a feeling it will go right to the end. We will give everything we have and they will too.”

Liverpool host Tottenham Hotspur, who are third in the standings, in the league next Sunday.