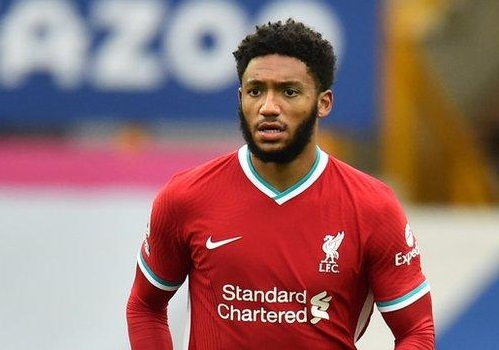 Liverpool defender Joe Gomez will miss a “significant part” of the rest of the season after having surgery on his left knee, the English Premier League champions said on Thursday.

Gomez sustained the injury during a training session with England on Wednesday and was withdrawn from the squad before Thursday’s friendly against Ireland.

Liverpool said in a statement that Gomez had undergone surgery to repair a tendon in his left knee, with “no damage to any other associated knee ligaments”.

“The operation to correct the damage, which took place in London on Thursday morning, was a success and the 23-year-old will make a full recovery,” the club added.

“No time scale is being placed upon his return, though the issue is likely to rule him out for a significant part of the remainder of 2020/2021.”

Gomez’s injury is a massive blow to manager Juergen Klopp whose side are already without key centre-back Virgil van Dijk because of a season-ending knee injury.

Liverpool, third in the standings with 17 points from eight games, host second-placed Leicester City on Nov. 21 after the international break.