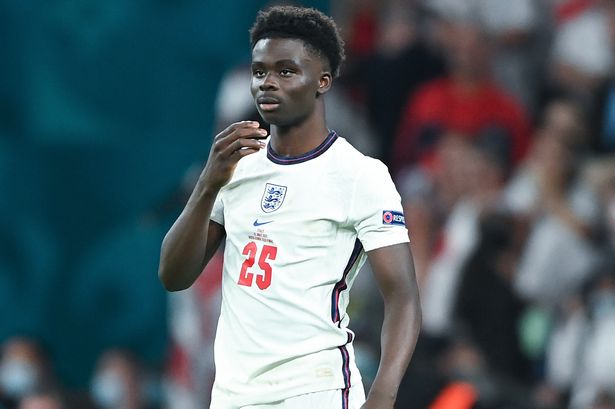 It was their first match at Wembley since the Euro 2020 final, and was a carnival atmosphere under the arch before kick-off.

This was as fans showed their appreciation for an unforgettable summer, just 56 days on from the agonising penalty kicks loss to Italy.

Much-changed England responded with a comfortable, if unspectacular, victory against the side ranked 156th in the world.

Saka completed the scoring to bring a smile to Gareth Southgate’s face and millions across the nation.

While Jesse Lingard hit a brace and substitute Harry Kane moved onto 40 international goals, there was no more popular goalscorer than the likeable winger.

The two goals were Lingard’s first international goals since November 2018.

Saka missed from the penalty kick spot against Italy, along with Jadon Sancho and Marcus Rashford, but he showed great character in an impressive performance as he returned to Wembley.

Not only did he assist both of Lingard’s goals but the Arsenal player also celebrated his 20th birthday with a headed effort.

They all helped England’s 100 per cent World Cup qualification record to continue with ease.

Saka was given a raucous reception as an independently-funded banner in support of the trio was unfurled before kick-off.

“It’s the perfect birthday present for me, I’m really happy we got the win and I could celebrate my birthday like this,” Saka later said.

“I’m really happy with the reception everyone gave me. That meant a lot for me and made me want to give my all.

“I think it means a lot, it really made a difference for me, even just now I can hear fans cheering my name.

“It makes me believe everyone supports me through thick and thin and it’s nice.”

Saka gave his shirt to a member of the crowd before heading down the tunnel at full-time and Southgate hopes it can close the recent chapter of the player’s career.

“He got a fabulous reception, before and during the game,” Southgate said.

“You can see how popular he is with the rest of the team as well.

“I hope it provided closure if it was needed, but I don’t think there’s a player in that dressing room that thinks anything other than positively about what he did all summer.”