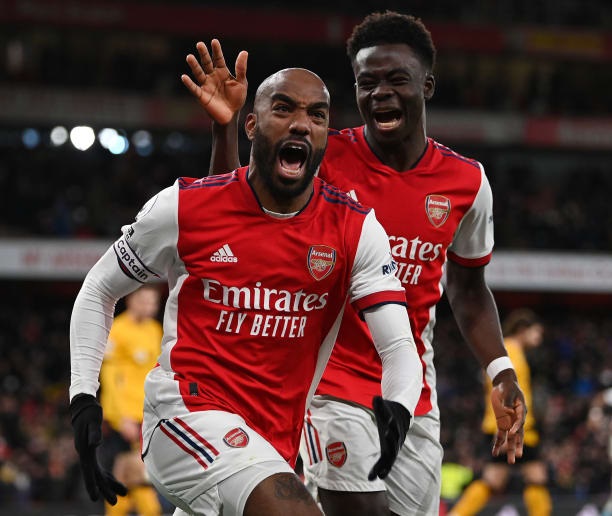 The win at the Emirates Stadium propelled Arsenal to within touching distance of the English Premier League’s (EPL) top-four on Thursday.

In-form Wolves, who began the evening one place behind Arsenal, looked poised to move into fifth spot as they defended tenaciously to preserve the early lead given to them by South Koreas’s Hwang Hee-Chan.

But the home side’s often desperate pressure was finally rewarded in the 82nd minute when Pepe turned on a sixpence in the box and fired a shot past Wolves keeper Jose Sa.

In a frantic finale, Pedro Neto shot agonisingly wide for Wolves and Martin Odegaard went close for Arsenal before skipper Lacazette’s shot from close range went in off Sa’s arm to send the home crowd wild.

Arsenal’s third successive league win lifted them above West Ham United into fifth place with 45 points, one behind Manchester United but having played two fewer games.

If Arsenal do claim fourth place and return to the Champions League for the first time since the 2016/2017 season, they may well look back on this victory as the pivotal moment.

They huffed and puffed for long periods trying to break down one of the meanest defences in the EPL and their patience finally paid off.

“I feel really happy, it is amazing to win this kind of game in the last minute.

“We really wanted this win because we know it is important to be at the top of the table.

“A bit sad (the goal) is not gone down for me, I want to score but most important is to win,” Lacazette said.