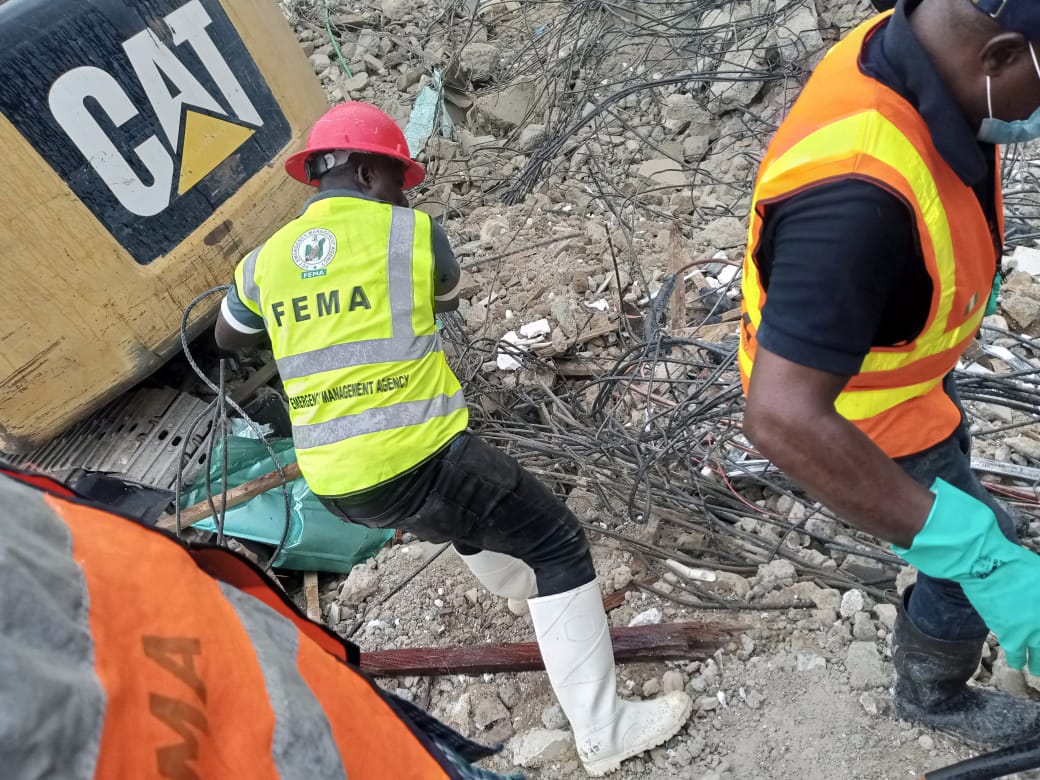 Two persons were feared dead on Friday, while five were rescued from rubble after a storey building collapsed in Kubwa Satellite town in the Federal Capital Territory, Abuja.

It was reported that the building, which was under construction at Hamza Abdullahi Street Off Gado Nasco Road, equally housed a shopping mall.

Our correspondent also reported that the rescued operation was carried out by a combined team of the Abuja Metropolitan Management Council and Federal Roads Maintenance Agency.

Also among the rescued team were the Federal Road Safety Corps, the Nigerian Security and Civil Defence Corps and others.

One of the residents, Mrs Chinyere Okah, who spoke with NAN, confirmed that the building which was being converted from a shopping mall to a residential apartment collapsed on Thursday night at about 10:30 p.m.

The Director-General, FCT Emergency Management Agency (FEMA), Alhaji Abbas Idriss, confirmed that two persons lost their lives in the incident, while the trapped persons had been rescued.

Abbas explained that the agency received a distress call about the incident at 11.45 pm on Thursday evening and thereafter activated its stakeholders to the scene.

He revealed that five persons were rescued and taken to Kubwa District Hospital, noting that two of the patients had since been discharged.

“As a follow up to the developing story of the collapsed building at Kubwa, a suburb in the FCT, the two trapped persons in the rubble have been rescued fatally injured.

“The bodies of the two persons that lost their lives have been deposited at the Kubwa District Hospital mortuary. Their relatives have been identified and were making arrangements for their burial.

“The rescue operation at the collapsed site came to an end with five number of persons rescued alive, three with various degrees of injuries , while two persons were unhurt and discharged from the Kubwa District Hospital,” he said.

He commended all the stakeholders for their prompt response and cooperation, including construction companies which is line with their corporate social responsibilities mobilised and deployed all their resources to saving live.

He also lauded the Security Agencies for their vigilance and support and t residents of the area for their cooperation during the rescue operations.

Idriss, however, appealed to developers to always obey the building code and warned residents to desist from living in uncompleted buildings.

Also, Mr Ikharo Attah, Senior Special Assistant on Monitoring, Inspection and Enforcement to the FCT Minister, said the owner of the property was fore-warned by concerned residents.

“The building was initially a shopping mall, but the report we got from residents was that the owner was warned, and at a certain point, it was now being converted to a residential apartment.

“The down was a shopping mall, but they were putting up some blocks of flat on the first and second suspended floors. You cannot alter a shopping mall and convert to a residential building thereby giving it more load that what it was meant to carry,” he said.

Attah added that the FCT Minister, Malam Muhammad Bello had ordered that tests be carried out on most of the high rise buildings around the area.

He noted that the combined team of security agencies at the scene is currently trailing the owner of the property, who residents suggested may have absconded.

“We have a policy in the FCTA that when a building collapses, the land is forfeited and revoked and the place is converted into a park or garden for residents around the neighbourhood,” he added.

On his part, Umar Shuaibu, Coordinator, Abuja Metropolitan Management Council, blamed the incident on quackery and shady construction, adding that the FCTA has a policy of subjecting old buildings to integrity test.