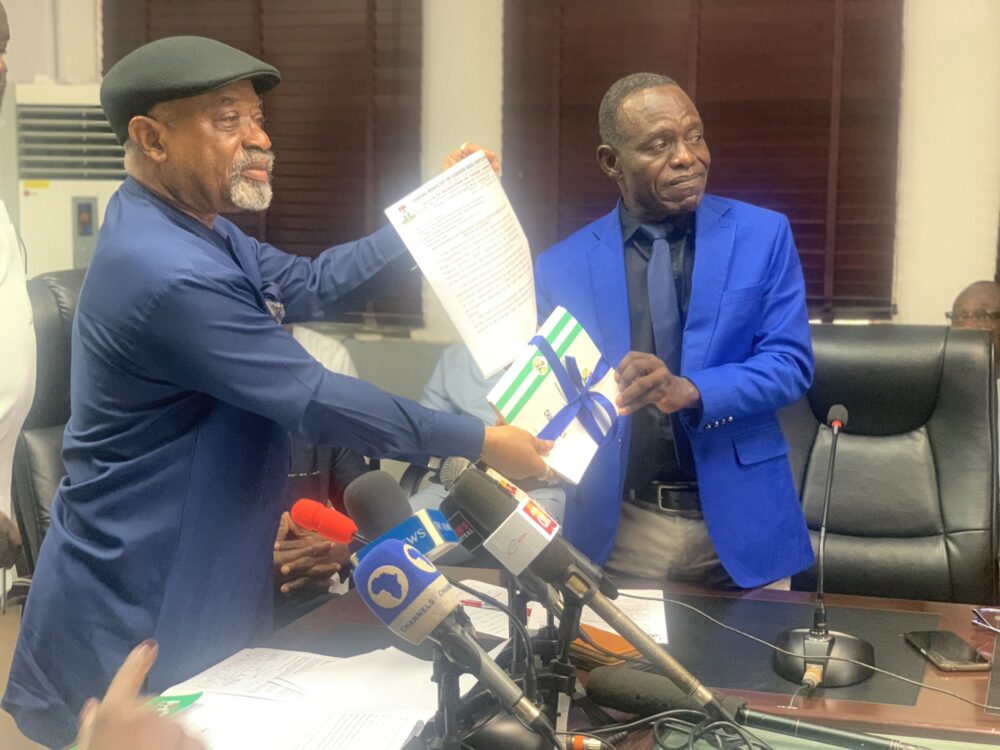 The Federal Government has appealed to the Nigeria Labour Congress (NLC) to rescind its opposition to the registration of two new academic unions in the Nigerian public university system.

Sen. Chris Ngige, Minister of Labour and Employment, made the call in a statement signed by Mr Olajide Oshundun, Head, Press and Public Relations, in the ministry on Tuesday in Abuja.

It was reported that the new unions are the Congress for Nigerian University Academics (CONUA) and the Nigeria Association of Medical and Dental Academics (NAMDA).

Our correspondent reports that CONUA and NAMDA received letters of recognition recently by the ministry in Abuja.

However, in a letter to Ngige, the President of NLC, Mr Ayuba Wabba, demanded for the withdrawal of the letters issued to the unions, is on the grounds that their registration contravened the laws guiding trade unionism.

Ngige, in his reply, on Oct, 12, had appealed to NLC to allow the new unions to exist in the spirit of Freedom of Association.

The minister insisted that the Trade Dispute Act 2004 gives him the sole power to register new trade unions, either by registering a new union or regrouping existing ones.

He reiterated that the new unions were offshoots or by-products of regrouping and their applications were considered by two committees of his ministry.

He said that this was with the Registrar of Trade Unions participating when the first recommendation for approval was given in 2019, and again in 2022.

He also said that CONUA and NAMDA were regrouped from the Academic Staff Union of Universities (ASUU), for efficiency and effectiveness in the system.

The minister added that ,more importantly, to protect these groups of university teachers whose worldview differs from the restive parent union.

“Comrade President, do not unnecessarily oppose the registration of these new academic unions.

“Because with ASUU, they are all like seeds on the academic soil of Nigeria and which will grow into big trees we don’t know, but the one which her trees are not bearing good fruits, we already know.

“So, as an uncle of the unions, oppose none in the spirit of Freedom of Association,” he said.

He said that it should be noted that Section 3 (2) of the Trade Dispute Act, CAP T14 gives the Minister of Labour and Employment, the sole power to register new trade unions, either by registering new trade union or regrouping existing ones.

He added that the matter was a subject of litigation in the National Industrial Court of Nigeria (NICN) in most recent case which the President of the NLC failed to mention in his narration of court cases,

“The case of the Nigerian Union of Pensioners (NUP) and the regrouped Federal Parastatals and Private Sector Pensioners Association of Nigeria (FEPPAN) from NUP where the Law on Regrouping of Trade Unions was extensively explored and ruled upon.

“Unlike the cases cited by the President of the NLC to misinform the general public and unfortunately lead astray his affiliate Trade Union – ASUU,” he said.

Ngige recalled that the NICN in a Suit no. NICN/ABJ/219/2019, buttressed its earlier ruling on the matter and which had stated inter alia that the power to register trade unions resides with the Minister of Labour and Employment.

He noted that the last segment of Section 3(2) does not refer to the regrouping of existing trade unions, hence, the differentiation within the section between registering a new trade union and regrouping existing ones.

According him, we note your reference to Section 5 of the same Act, which deals with the “Procedure on receipt of application for registration” of a Trade Union.

“Section 5(4) in Particular states that the Registrar shall not register a trade union if it appears to him that any existing trade union is sufficiently representative of the interests of the class of workers concerned-CONUA members were ostracised and de-unionised by ASUU.

“Do we as the “Competent Authority” on Labour matters, including trade union services, pay homage to ASUU and acquiesce to leaving a large segment of lecturers and academia un-unionised, without protection, without a voice, and without a right at work.

On NAMDA, Ngige said that they are medical doctors lecturing in the universities were against the incessant prolonged and illegal strikes by ASUU.

“They said the strike had disrupted medical training and caused consequential damages to the educational system and by implication, the quantity and quality of future medical doctors and dentists in Nigeria.

“They have been teaching and some have graduated their students since the 8-month old strike by ASUU which commenced on Feb 14 2022. Universities of Maidugri, Bauchi and Sokoto medical teachers are indeed patriots.

“Moreover, their peculiar needs are quite different from the rest of ASUU members, and they are often left out on welfare and career progression in the universities – the core functions of a registered trade union,” he said.

Ngige therefore, said the NLC President to desist from using his position to deceive the general public by misguiding them with mal-citations of Labour Authorities.

He added that, if ASUU feels aggrieved, they could approach the Courts for Judicial remedy as law abiding citizens just like the Federal Government through Federal Ministry of Labour & Employment.

“That is by virtue of the powers conferred by Section 17 of the TDA, transmitted the FG/ASUU trade dispute to the NICN for adjudication, due to refusal of the union to comply with the provisions of Section 18 of the TDA, conciliation having failed,” he said.