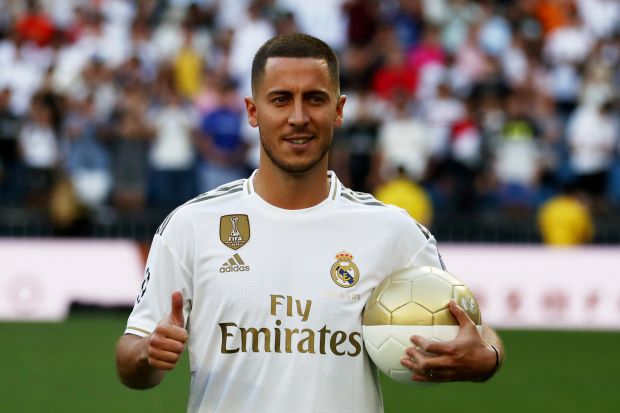 Real Madrid presented Eden Hazard as their new “galactico” signing on Thursday with an army of adoring fans queuing outside the Santiago Bernabeu stadium to welcome the Belgian play maker.

Donning the white strip of the 13-times European champions, the club’s joint-record signing kicked balls into the crowd and posed for photographers on the pitch at the official presentation.

Hazard, who joins from Chelsea on a five-year deal, had earlier undergone a medical.

Pointing to the badge on his shirt, the 28-year-old kissed it to leave the 50,000 strong crowd in no doubt about his allegiance.

“Hola todos,” were his first words at the start of the presentation, broadcast around the world, before continuing in French.

“I’m really looking forward to playing for Real and winning lots of titles. It was my dream since I was a child to play for Real Madrid and I just want to enjoy this moment,” he said, accompanied by family members.

Video images showed him signing the contract with Real President Florentino Perez, and his shirt being made up.

“Eden, now you are where you wanted to be. Today one of the great dreams of your life comes true,” Perez told him in his introductory speech.

“You are a Real Madrid player and are part of this club to defend the shirt. The Bernabeu is your home. Here you will feel the passion and emotion of those who want to enjoy your talent and creativity.

“The fans will be with you in every match…they know your football is special. Welcome to Real Madrid, welcome to your home.”

Real signed Hazard from Chelsea on a five-year contract for a reported 100 million euros (£89 million), plus add-ons.

Coach Zinedine Zidane is a long-time admirer of the Belgian, who he named as a “star of the future” in 2010 when Hazard was playing for Lille.

Hazard is Real’s third major signing as they bid to rebuild their squad after an embarrassing campaign on all fronts in which they ended up without a trophy, sacked two coaches and finished 19 points adrift of La Liga champions Barcelona.