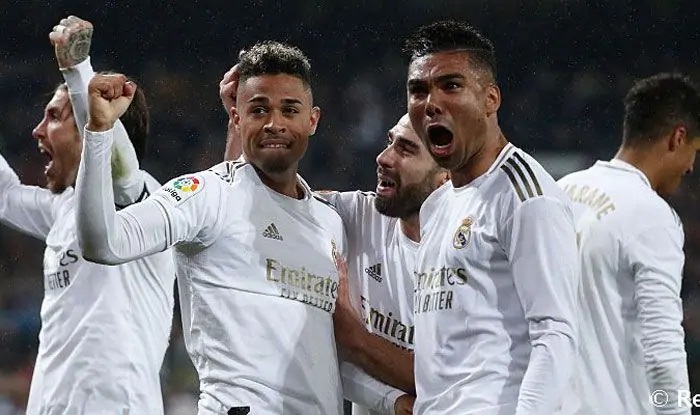 Real Madrid scored two goals in the final minutes through Karim Benzema and Casemiro to rescue a 2-2 draw at Borussia Moenchengladbach in their UEFA Champions League Group B match on Tuesday.

The result ensured that the Spanish champions snapped a three-game losing run in the competition.

Marcus Thuram fired in for the lead in the 33rd minute and tapped in on the rebound in the 58th minute.

Benzema cut the deficit in the 87th minute and Casemiro bagged a stoppage time equaliser.

The 13-times European champions, who had lost their previous three games including a 3-2 defeat by Shakhtar Donetsk last week, earned their first point in the competition.

“We didn’t think this would be such a drama,” Real Madrid coach Zinedine Zidane said. “But my team showed that they know how to react.

“We always play to win and show the hunger to win. No way were we happy with the draw.”

Gladbach, who also conceded a 90th minute equaliser in their 2-2 draw at Inter Milan last week, are second in the group on two points.

Shakhtar are top on four points after a 0-0 draw with Inter Milan.

Zidane had been hoping to carry his side’s momentum from their 3-1 weekend win over FC Barcelona in La Liga into the game.

Yet, in spite of their confidence in possession, chances were few and far between.

The Foals struck on the break with Alassane Plea pouncing on a Toni Kroos mistake to set up Thuram for his first goal in the competition.

Real Madrid initially had more spark after the break and hit the woodwork when Asensio’s 46th minute shot was headed on to the crossbar.

Gladbach then struck against the run of play, with 23-year-old France youth international Thuram tapping in on the rebound after goalkeeper Thibaut Courtois had pushed out a shot from Plea.

With the Germans thinking the game was already won, Real Madrid pulled a goal back.

That was when Casemiro headed on for Benzema, who became only the second player to score in 16 consecutive Champions League seasons.

Brazilian Casemiro then dashed Gladbach’s hopes of a memorable win, driving the ball into the roof of the net in stoppage time.

“When you concede two late goals and drop the points it is not a good feeling,” Gladbach coach Marco Rose said.

“It came down to the quality of Real Madrid. We wanted to defend better until the end, but sometimes you need a little bit of luck and we didn’t have that tonight.”

Related Topics:borussiaDRAWReal Madrid
Up Next