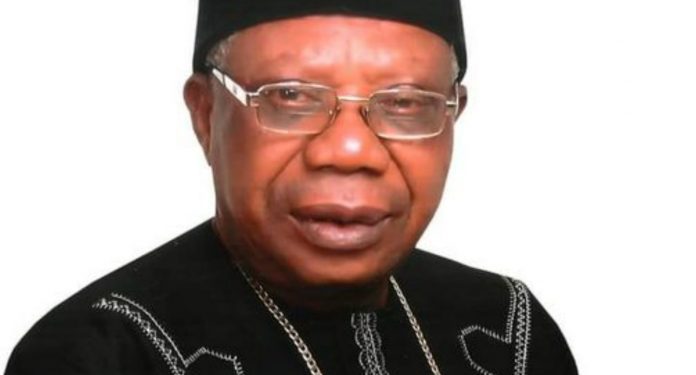 Chief Whip of the Senate, Dr Orji Kalu has described the demise of Igbo legendary and philosophical singer, Chief Chukwuemeka Maduka, popularly known as “Morocco” as a big loss to the country.

Kalu, who lamented the passing of the music meastro and social crusader, acknowledged the late musician’s contributions to the social, economic and political development of Nigeria.

He said that the late Morocco, through his Ekpili music, addressed social and moral issues, adding that he also used his music to advance the cause of the people.

The senator, in a condolence message, commiserated with the government and people of Anambra over the demise of their illustrious son.

He added that the memories of the late social crusader would remain evergreen in the minds of his fans and Nigerians in general.

Kalu said: “The passing of renown musician, Chief Chukwuemeka Maduka (Morocco), is a huge loss to the entertainment industry and Nigeria at large.

“I recall early this year, the late musician celebrated his 60th anniversary on stage, with over 120 albums to his credit.

“The late musician alongside his contemporaries, the late Chief Stephen Osadebe and the late Chief Oliver De Coque, contributed immensely to the entertainment industry, locally and internationally.

“They all had exceptionalism and musical depth on stage. The late Morocco’s music was a bridge between the old tunes and new breed of Ekpili music.

“Both the old and the young enjoyed the songs of the late King of Ekpili music. The late philosophical singer was the first Ekpili musician to perform outside the shores of Nigeria.

“He was popular in the United States of America, United Kingdom and South Africa.

“Above all, the music career of the deceased was remarkable, unbeatable and fulfilling.”

He also extended his heartfelt condolences to the Performing Musicians Association of Nigeria (PMAN), Morocco Maduka Global Fans Club and members of the Maduka family.

Kalu, who also admonished upcoming musicians to emulate the worthy legacies of the deceased, prayed to God to rest the soul of the popular musician and give his family the fortitude to bear the irreplaceable loss.